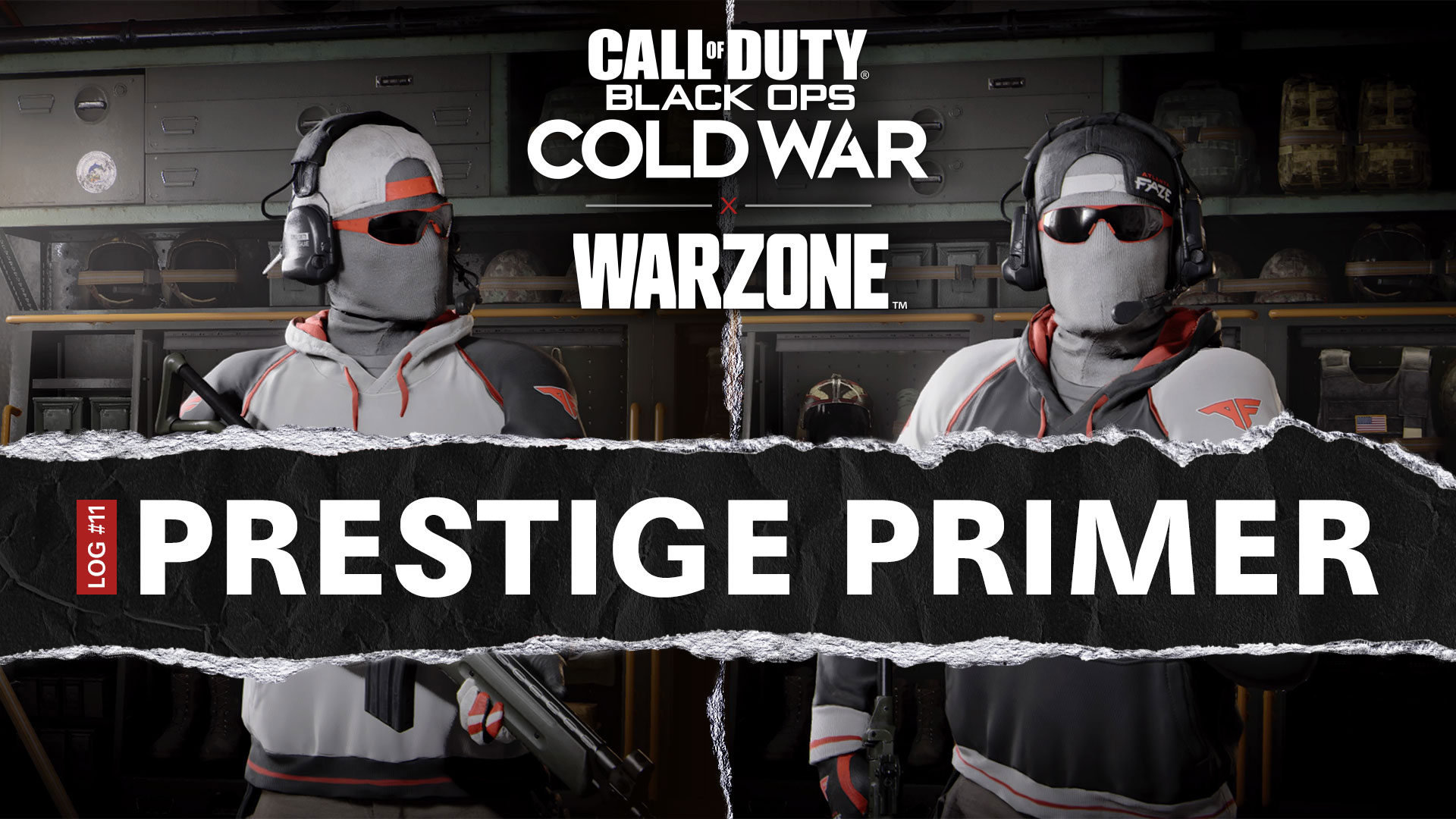 From earning Quad Feeds to setting up multi-Contract runs in Warzone, these tips can help you become a Multiplayer Season One Master in no time. Plus, we feature the CDL Team Packs and a weapon for crushing the League Play competition.

A long holiday weekend is here, and with it comes a Double Weapon XP boost plus half-priced Tiers for the Season One Battle Pass system.

While you’re taking advantage of this opportunity to unlock attachments for your favorite weapons or max out the tiers in the Battle Pass system, you might also want to take down some of the toughest Multiplayer Season Challenges in Multiplayer for some incredible XP rewards before the end of Season One… or at the very least, get a head start on them for the next season.

With that in mind, let’s level up:

From League Play’s introduction in Black Ops Cold War on Monday to the Call of Duty League’s first match of the season on Thursday, this week was nothing short of exciting for passionate competitive Call of Duty fans.

The Call of Duty League Opening Weekend, hosted by Atlanta FaZe, is live every day starting at 12 PM PST / 3 PM EST until February 14 with all 12 teams seeing some action. You can catch all the action on the Call of Duty League’s YouTube channel, and check out the latest standings and match schedule via the CDL Channel in Black Ops Cold War League Play.

Also, if you want to test your prediction skills and think you know who is going to win this weekend, you can enter the Stage 1 CDL Pick’em game* to make your picks for a chance at winning some awesome prizes. Click here for more details.

This week, our featured Operator is wearing the host team’s regular and alternative uniforms found in the Atlanta FaZe Team Pack. Head to the Store within Black Ops Cold War and Warzone™ today to show your support for Atlanta FaZe or the other 11 Call of Duty League teams while also getting those two new skins, plus a universal camo for all Black Ops Cold War weapons, a Watch, Charm, Calling Card, Emblem, and Sticker.

Following a Double XP Weekend at the start of February, you may already be a Season One Prestige Master and have the full slate of Season Challenges to conquer. If not, then you can earn a ton of XP through the ones you’ve unlocked already, especially in the back half of the Multiplayer Season Challenges.

On our list, this is one of the toughest challenges this season, especially because Scorestreaks do not count towards Quad Feed medals.

In addition to playing as aggressively as possible, you may find this objective slightly easier by changing up your Multiplayer playlists to either Hardcore or objective modes, or ideally both.

Eliminating someone in Hardcore is much faster compared to regular Multiplayer, making Quad Feeds potentially easier to earn for someone with quick reflexes. As for objective game modes, such as Domination or Hardpoint, they usually have more predictable engagement-heavy zones on or around objectives, giving you better chances to earn a Quad Feed.

Proximity Mines are often best used when placed on objectives or in chokepoints and entryways with few alternative routes.

For example, on Express, think about placing mines at the top of the ladder right outside the Control room, or right at the door of the Ticketing room inside the main terminal. These areas see frequent action across all game modes, but see even higher traffic in Hardpoint where both of these rooms serve as Hardpoint hills.

Counter UAVs are a fairly low-cost Scorestreak, making this challenge rather easy to complete. If you want to complete this quicker, take the Jammer along as a Field Upgrade and place them where they are most effective: in secluded spaces, such as in a corner or around other small objects, within high traffic or objective areas.

For this objective and any other ones involving Field Upgrades, consider running the Gearhead Perk, as it will reduce the charge time on all Field Upgrades to let you place them around the map more frequently.

A seasoned Warzone veteran will be able to complete this without issue, as stacking up Bounty Contracts is a popular strategy among elite players.

An alternate way of completing this is to make use of Supply Run Contracts, using vehicles to travel between Buy Stations quickly for a road trip around Verdansk. Squads can get also get a head start on this strategy by having one Operator drop on a Supply Run Contract immediately, with the rest of the team using their parachutes to float until the Buy Station is marked for Contract completion.

Much like the Eliminations objective, this one is going to be completed naturally as you play the game.

Remember that assault rifles tend to perform best when they are used for mid-range combat, but are balanced enough stat-wise to be a jack-of-all-trades across a variety of engagement situations.

Treat this objective like an extension of the Rigged to Blow challenge, but with the Gas Mine Field Upgrade.

Because Gas Mines sometimes don’t eliminate enemies on their own, try sticking close to them so that when they go off, you can finish the job with the weapon of your choosing.

Although tactical rifles, sniper rifles, and LMGs with vehicle damage barrels are all solid Primary weapons for dealing with vehicles and Scorestreaks, lock-on launchers are ultimately the key to completing this objective.

Set up a Scorestreak-destroying loadout in Multiplayer complete with a lock-on launcher as a Secondary Weapon and the Engineer perk, which highlights enemy Scorestreaks in a bright red light, then be ready to switch to it the second you hear (or see) those enemy Scorestreaks go online in the skies.

In addition to coordinating with your Warzone teammates to make sure you finish off downed enemies in Battle Royale, this objective can be much easier to complete in Black Ops Cold War’s 40-player Multiplayer modes.

This mode’s constant respawning should give you plenty of opportunities to seek and eliminate Operators. Just be sure to completely eliminate them once they are knocked down to have it count toward your challenge completion.

Otherwise known as Bloodthirsty Medals, getting 5 kills without dying may seem intimidating and difficult, but with proper intel and squadmate support, this objective is more than achievable.

Knowing where the enemy is can help you stay alive and offer insight into the best angles of attack. Try using the Spy Plane and H.A.R.P. Scorestreaks, as well as the Field Mic Field Upgrade, to gain intel on their positions. Your squadmates can also make you aware of enemy locations. Whether you are playing with friends or fellow community members, try using verbal callouts or the Ping system to let them know of enemy movements, and they’ll more than likely do the same for you.

This challenge can only be done in squad-based modes (e.g. Warzone), so first and foremost, make sure to call in your best squadmates up to take this final challenge down.

Next, consider the numbers game. It’s much easier to conquer this challenge when playing a squad-based Multiplayer game mode with a maximum of 10 teams, rather than playing Battle Royale modes where up to 70+ enemy teams are in play.

Finally, be patient. Sometimes, an aggressive squad can put themselves in bad positions, such as stacking themselves on a bomb site or running out in the open looking for a team wipe. Don’t get too comfortable waiting for other squads to move, but still allow them breathing room to make their own mistakes.

After completing all 20 Multiplayer challenges, you’ll receive an additional 10,000 XP boost as well as an animated Master Calling Card. Pair this with the Emblem from the end of the Season One Battle Pass, and you’ll be considered a true master of Season One in any lobby you enter.

Remember, all of these challenges can be completed at your own pace once they are unlocked, so if you want to save these for the start of Season Two, bookmark this page and come back to it whenever you’re ready to bank all of this XP.

Gunsmith Custom Creation of the Week

Whether you’re going for those Quad Feed and Bloodthirsty challenges or looking to practice as an SMG player for League Play, it’s best to know what the Call of Duty professionals use to dominate their competition.

Of course, the Krig 6 is worthy of highlighting as the current Call of Duty League meta assault rifle, but given that Atlanta FaZe’s Tiny Terrors are two of the best SMG players in the league, it only feels right to feature their weapon of choice: the AK74u.

The above configuration is the exact one found in some League Play pre-build loadouts, so feel free to recreate it within your Loadouts for other Multiplayer game modes, or place these attachments on a Blueprint from this weapon family to show off your extensive collection in your next League Play Hardpoint, Search & Destroy, or Control match.

This attachment configuration is built for aggressive Operators who want to be quick on the draw, but also remain accurate across typical engagements. The Spetsnaz Speedgrip and Compensator come together to mitigate the weapon’s recoil significantly, with the former also boosting the weapon’s Sprinting Movement Speed to its maximum in exchange for three other movement speed penalties. Because of this effect, it’s best to sprint often with this SMG, taking advantage of the KGB Skeletal Stock’s Sprint to Fire speed buff that’s slightly offset by the GRU Elastic Wrap, which allows for incredibly fast aiming down sights (ADS) and going prone while ADS.

You can see this in practice by tuning into the Call of Duty League this weekend.  Watch and learn how the best SMG players in the world move and fire with this weapon, and you may pick up a few strategies for the next time you check in for some League Play in Black Ops Cold War.