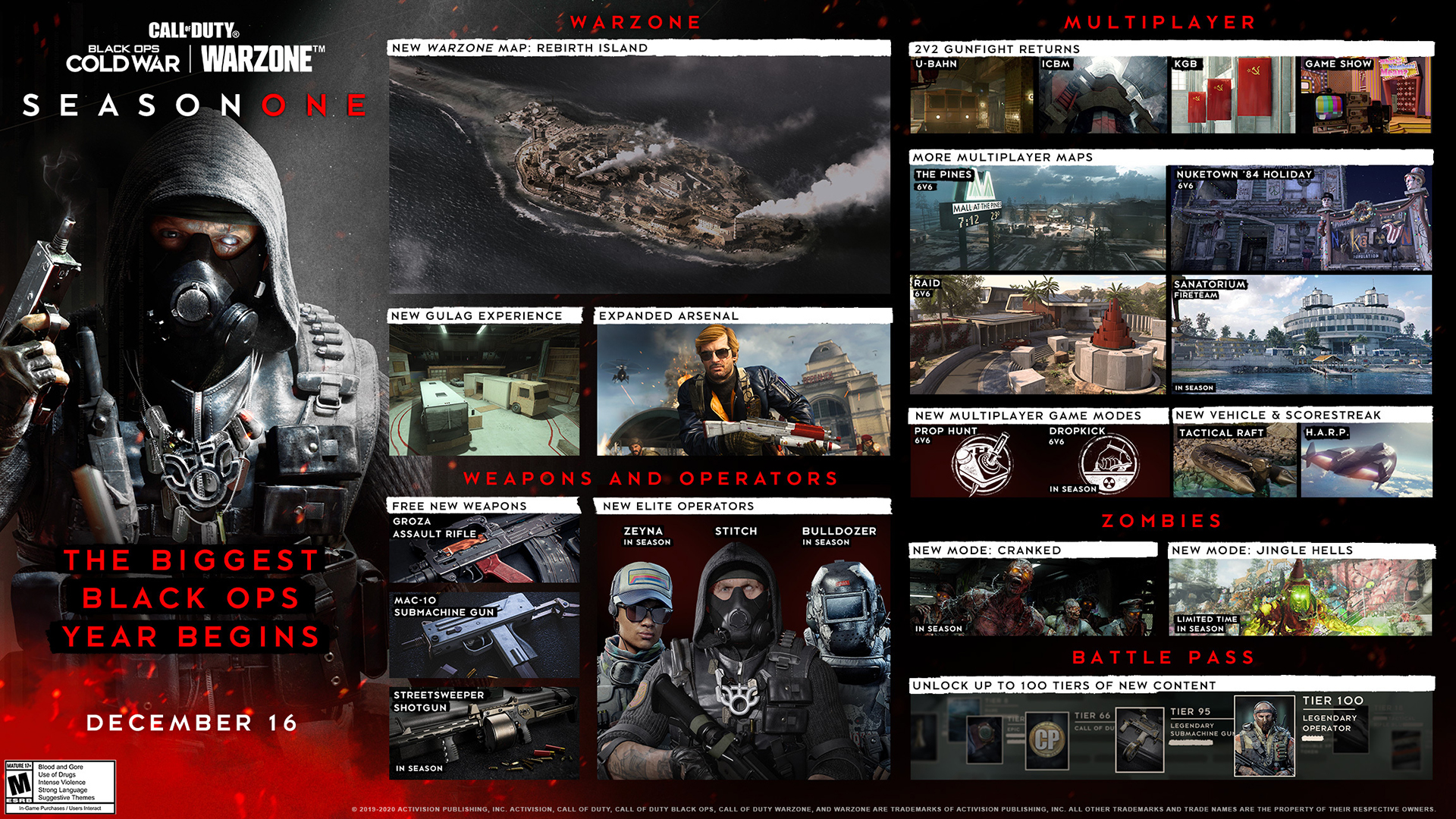 On December 15 at 11PM PT (December 16 for most) Season One will launch. This new update features new content for players to enjoy. Hang tight because this is a big one. Check out all the changes, updates, patch notes and more below.

In case you’ve missed it, check everything you need about whats coming season one here, and the battle pass info here.

* = Denotes content or feature available at the start of Season One.

Unlock the new Groza assault rifle and Mac-10 SMG for free in the Season One Battle Pass System for use in Black Ops Cold War Multiplayer, Zombies, and in Warzone. Whether you’re a run-and-gunner or a tactical OBJ player, both firearms can fit a play style for any situation.

Unlock this infamous one-eyed Gulag escapee at Tier 0 in the Battle Pass. “Stitch” comes with two Operator Missions with objectives for both Multiplayer and Zombies, which will unlock four Operator Skins, as well as Calling Cards, Emblems, and bonus XP once completed.

Later in the season, Daily Challenges are also planned for Black Ops Cold War and Warzone, with up to nine Challenges to complete each day for additional XP bonuses. Daily Challenges will support a wide variety of play styles across the full suite of Black Ops and Warzone content and can be swapped out at any time, so there’s always something new to achieve no matter how you play.

Season One brings 1,000 new levels to climb after completing Military Ranks, with new Prestige Levels and milestone rewards to unlock along the way. Players can reach up to Prestige 7 in Season One, with the title of Prestige Master waiting at Season Level 200. The race is on!

Multiplayer gets a massive expansion in Season One with the addition of eight MP maps, 2v2 Gunfight, Prop Hunt, the new H.A.R.P. Scorestreak, and Combined Arms: Hardpoint this week, with more coming later in the season, including new Fireteam modes.

Black Ops Cold War invades Warzone in Season One with the addition of 30+ Cold War weapons and the new Rebirth Island map launching with the new Resurgence mode at the start of the season!

More info on all Multiplayer modes, Zombies modes, and Warzone modes can be found here.