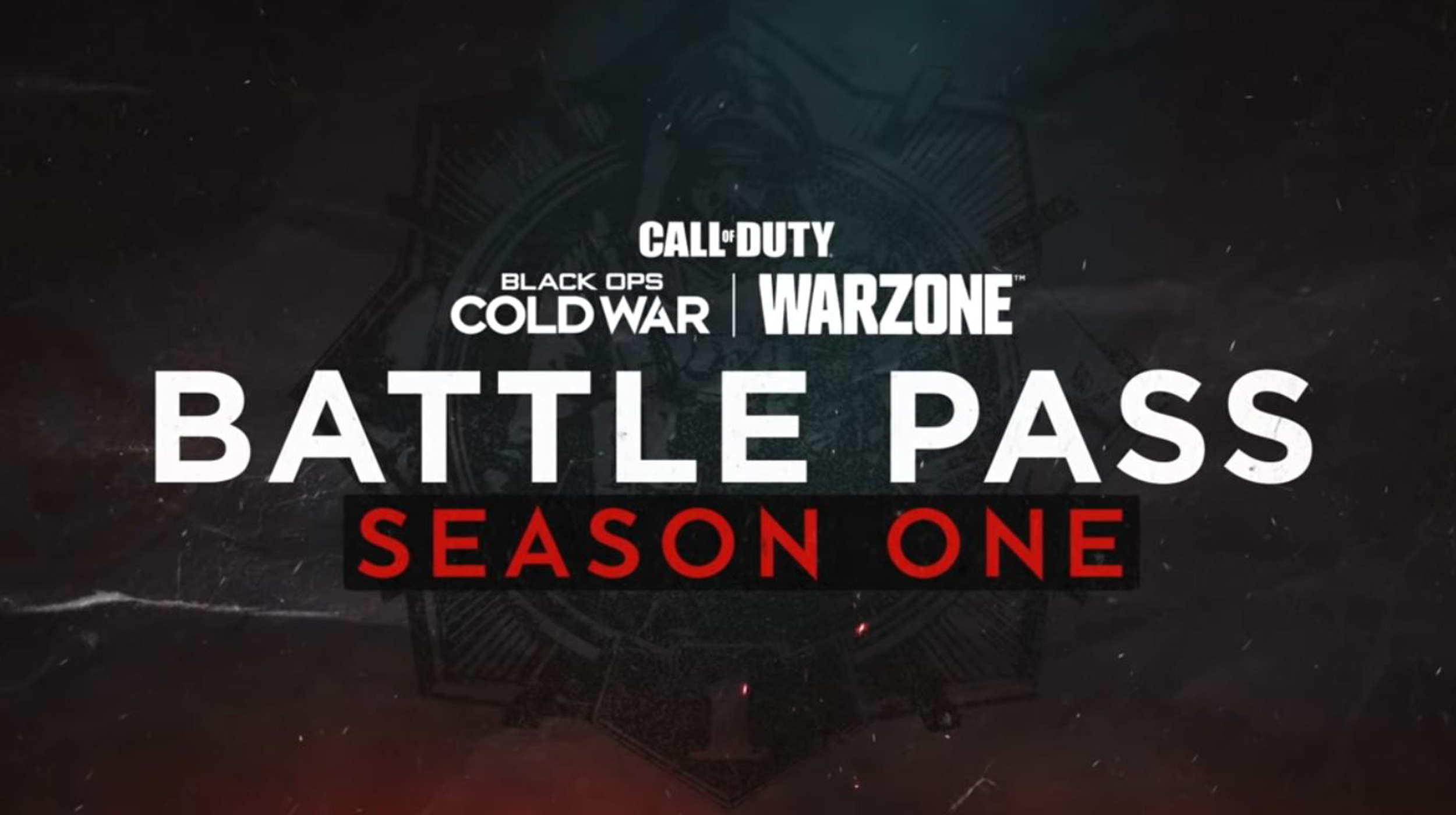 What is the Battle Pass System?

Each season of Black Ops Cold War and Warzone comes with a Battle Pass System, which allows you to earn a selection of free items, including two new base weapons, several Weapon Blueprints, up to 300 COD Points, and more.

If you want to unlock more content through this system, purchase the Season One Battle Pass. By getting the Battle Pass, you’ll be able to get access to all 100 tiers, rather than just the free tiers included with the system.

Here are the highlights of what you can earn through the Season One Battle Pass, including within some of the Battle Pass System’s free tiers, just by playing Black Ops Cold War and Warzone:

New Operator – Stitch: The infamous one-eyed Gulag escapee is unlocked at Tier 0. With this unlock comes his “Redacted” skin, the signature armor he stepped out of the shadows with to greet Adler as the CIA agent fell into his nefarious trap.

This instant unlock also comes with the “Release Agent” Operator Mission, a set of objectives based in Multiplayer that rewards two skins – “Storm Diver” and “Spectre” – as well as a Calling Card, an Emblem., and plenty of XP to help set you on the path to reaching Prestige Master.

Finally, for the first time in a Battle Pass, players can unlock additional rewards through Zombies through the “Containment Zone” Operator Mission. Completing these objectives unlocks the “Siberian Ghost” and “Toxic Terror” skins, another Emblem and Calling Card, and even more XP. Expect to find another Zombies Operator Mission alongside a Multiplayer-based one at Tier 20 when Garcia’s “Sicario” skin is unlocked.

Adler Operator Skin and Mission – Stitch’s nemesis also gets a set of Tier 0 unlocks through the “Traveler” skin, a blue jacket that he wears whenever he puts a target on a permanent vacation, and the “Urban Infiltration” Operator Mission. By completing objectives within this mission, you can unlock the jet-black “Summit” and colorful “Globetrotter” skins, a Calling Card, an Emblem, and plenty of additional XP.

Silver Flash Watch – The time is right to welcome in some ‘80s inspired wrist accessories to Black Ops Cold War and Warzone, and it all starts with this Silver Flash Watch instantly unlocked at Tier 0. Synced to a real-world clock, this simple timepiece is sure to evoke some nostalgic feelings of a decade gone by.

Seasonal XP Boost – Purchase the Season One Battle Pass and enjoy a 10% increase in all XP earned during the season.

These two primary weapons, free to earn through the Battle Pass System, are ready to lead you to victory in Multiplayer and Warzone, or rip through the undead hordes in Zombies.

Mac-10 SMG (Tier 15): This compact, blowback operated submachine gun may be small in stature, but its ability to throw out lead at high fire rates allows it to punch up to the heavyweights. It’s the fastest-firing SMG compared to the five available at launch, and that’s not all. The Mac-10 boasts a solid effective damage range and can be reloaded quicker than the average SMG. Just be sure to control its high vertical recoil, or get close enough to the enemy to make it a non-issue.

Groza Assault Rifle (Tier 31): Chambered in 7.62, the Groza is a prototypical Soviet bullpup assault rifle known for its great handling speeds, allowing its owner to quickly aim down sights in the heat of battle. With a fire rate and bullet velocity near the top of its category, expect to deal solid damage to a target down-range and with quick follow-up shots for whoever arrives as backup.

Ready to stock up on Weapon Blueprints?

The Season One Battle Pass includes a massive 20-weapon collection of preconfigured and stylized Blueprints across seven primary and secondary weapon categories. Over half are considered Legendary, as they come with five attachments preconfigured, and three of these are included in the four free Weapon Blueprint tiers within the Battle Pass System. Although there are plenty of highlights in the earlier tiers, here’s three of the four powerhouses that bulk up the final 20 Tiers of the Battle Pass:

“Arid Constrictor” Assault Rifle Blueprint (FREE Tier 81): Built on the fastest-firing assault rifle in the game, the Arid Constrictor features a desert snake design wrapped around a collection of attachments that improve the weapon’s speed and accuracy statistics significantly.

“Constable” Tactical Rifle (Tier 85): You may never love another after taking this Blueprint out for a spin. The included Axial Arms 3x Scope is a perfect match for the four other attachments that maximize the weapon’s accuracy, including an Infantry Compensator and Field Agent Grip to reduce vertical and horizontal recoil.

“Gallantry” SMG (Tier 95): The first Blueprint for the new SMG, the Gallantry buffs this highly mobile weapon across the board in a gold-trimmed style with its five attachments. This includes a Bruiser Grip, which boosts speeds for regular movement, sprinting, moving while shooting, and aim walking, as well as a STANAG 55 Round Drum for additional bullets in each magazine.

Get More for Your Operators

Dread being caught wearing default threads? The Season One Battle Pass includes new skins for several NATO Operators as well as Beck, Portnova, and Garcia of the Warsaw Pact.

“Base Jumper” Adler Skin (FREE Tier 90): The “Base Jumper” skin is perfect for cold weather conditions, along with the “Stalker” and “Glitz” snowsuit skins unlocked through the included Operator Mission. Also included in this objective set is the “Stunner Shades” Calling Card and “Fly Guy” Emblem.

PLUS the “Pain in the Neck” Finishing Move (Tier 19): Finish off an unsuspecting enemy in style in Black Ops Cold War or Warzone with this new move that goes right for the jugular. This Finishing Move can be used by any Operator and is equipped in the Operator menu.

Reach Tier 100 to get a glimpse into Stitch’s past and show off some Legendary items during your next infiltration.

“Prisoner” Stitch Skin and Operator Mission: The orange jumpsuit Stitch wore as he plotted his escape from the Gulag is all yours at Tier 100. Fit him back in his old uniform and complete the included Operator Mission to get two more skins – “New Warden” and “Stripes” – as well as an Epic Emblem and Legendary animated Calling Card.

“Natural Order” Assault Rifle Blueprint: This Legendary Blueprint for the new assault rifle is ready to lay down the law in the hands of an agile Operator. It comes pre-configured with a Spetsnaz Compensator, Spetsnaz Grip, Dropshot Wrap, KGB Pad, and a Barrel that boosts its damage and strafe speed, all of which make for a powerful version of this mobile bullpup firearm.

“Assault” Vehicle Skins: A pair of black-and-white camouflage vehicle skins with red trim are included at this tier. Warzone players will enjoy this “Assault” skin on the SUV, while those who own Black Ops Cold War will also receive a similar “Assault” skin for the Tactical Raft in that game.

Season One Emblem: Put on this animated Emblem onto your player profile with pride, as it is a symbol of completing the Season One Battle Pass.

Just the Tip of the Spear

All these items represent just some of the tiers that can be unlocked in the Season One Battle Pass. Through all 100 tiers, you’ll get even more Weapon Blueprints, Reticles for optics, Vehicle Skins, Weapon Charms and Stickers for weapons, Calling Cards and Emblems for your player profile, and Double XP Tokens, which are all unlocked by simply playing the game.

Want to know more about Season One? Check out everything you need to know here.