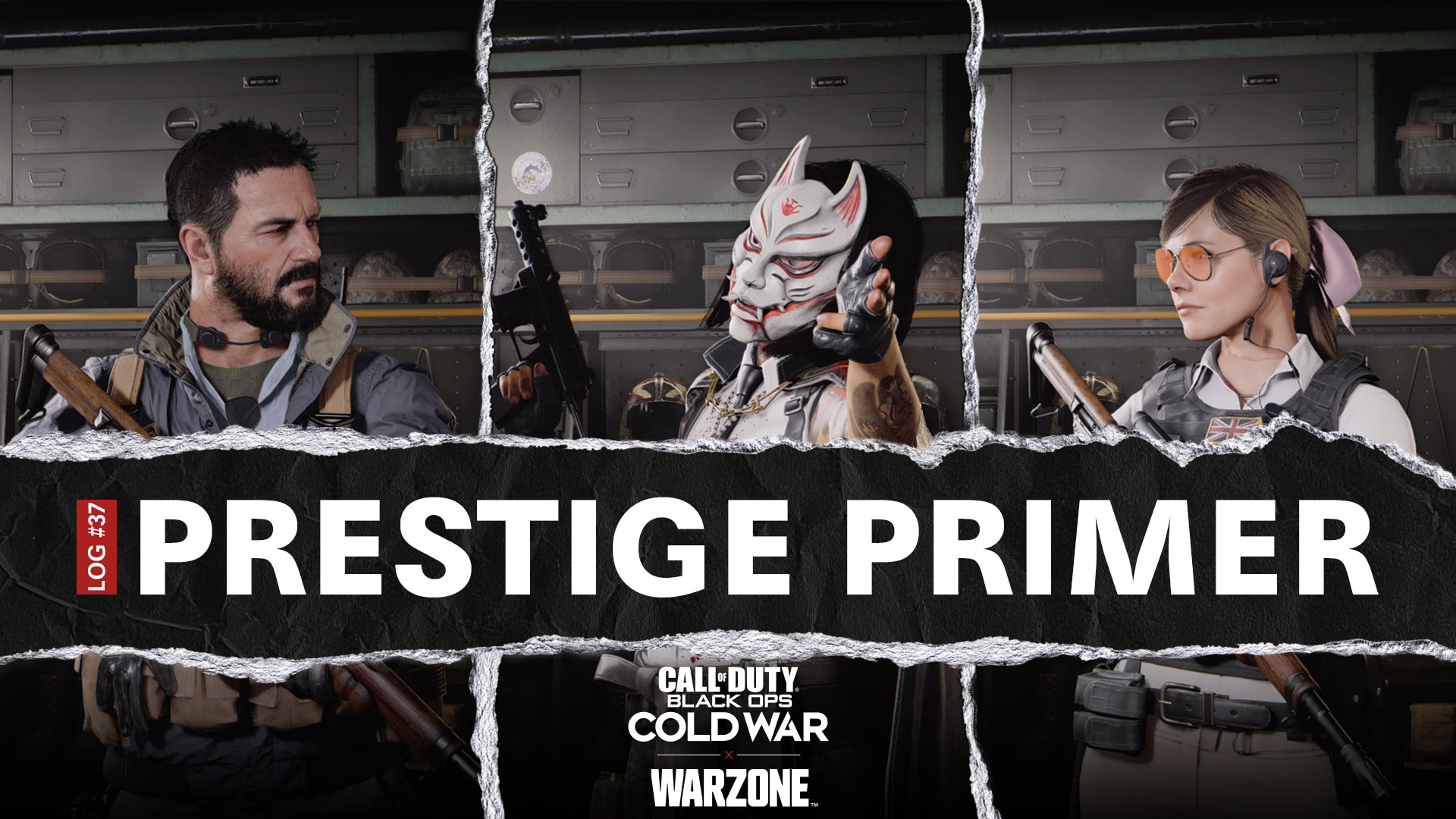 Season Five is officially here — alongside new maps and modes, there are 100 Tiers of epic new content within the season’s Battle Pass. Read on for the full weapon briefing, plus suggested Black Ops Cold War Multiplayer Loadouts alongside this week’s featured Operators.

This means new playlists, new Seasonal Challenges, Operator Missions, and a ton of new content to acquire through the Season Five Battle Pass, including two functional weapons: the EM2 assault rifle and the TEC-9 SMG.

To get your head straight with these new weapons right at the start of the season, this Prestige Primer has you covered with a breakdown and suggested Multiplayer Loadout.

There’s no time to waste, especially on the road to Tier 100 and Prestige Master in Season Five — let’s level up:

On top of the two new weapons, the Season Five Battle Pass is also fully stocked with an all-new Operator and fresh Operator Skins.

To start things off, we’re highlighting Kitsune and her Legendary “Kyubi” Operator Skin, a limited-time bonus for picking up the Battle Pass Bundle at the start of the season. Don the mask of the nine-tailed fox along with a cape and tie to show off your stylish, wily ways.

Get “Kyubi” now at Tier 0 by purchasing the Season Five Battle Pass Bundle before August 31st.

If you’ve got a bone to pick with your enemies, you might prefer the Woods “Payback” Operator Skin, unlocked at Tier 10. In the Season Five Cinematic, Woods was injured while breaching the Echelon Listening Station where Kitsune activated the mind-altering Numbers Program. Arriving too late, Woods witnessed his colleagues turn against him when the broadcast went live.

The “Payback” Operator Skin additionally comes with the “Presumed KIA” Operator Mission. Complete its objectives to unlock the “Resilience” and “Vigilance” Operator Skins, the “Glasses Included” Emblem, and the “Hijacked Hero” Calling Card.

Our last Operator comes from the season’s first Store Bundle — it’s Park as the “Investigator,” straight out of the Stolen Goods Bundle.

Included in the Bundle is the “Lost Lion” Weapon Blueprint for the new Cane melee weapon, which you can use to complete the in-game challenge to unlock its base version.

Yes, the Cane is available to unlock and use right at the start of Season Five, but let’s focus our attention on the two new ranged weapons that can be unlocked in the season’s Battle Pass.

Across Warzone and Black Ops Cold War, Operators will have new heavy-hitting options at their disposal in the already-deep Assault Rifle and SMG Primary Weapon categories — the EM2 assault rifle and the TEC-9 SMG.

Both of these weapons are unlocked via free tiers in the Season Five Battle Pass, but those who purchase the Battle Pass Bundle will rocket up to Tier 20 (Tier 25 on PlayStation), earning the EM2 immediately at Tier 15 of the Season Five Battle Pass System. From there, one only needs to advance to Tier 31 to get the TEC-9 and complete their base weapon arsenal for the season until the Marshal comes around later in the season.

Getting the full Battle Pass also allows you to unlock the first Weapon Blueprint for these two new base weapons, as there is an Ultra-rarity Reactive “Geomatik” assault rifle at Tier 95 and the “Microchip” SMG at Tier 100, shown above with Kitsune’s Ultra-rarity “Samurai” Skin, also available at that final Battle Pass tier.

But let’s leave those awesome Blueprints alone for later in the season — what’s a good Loadout for each of these weapons to use this weekend while you level it up?

Inspired by each weapon’s early attachment unlocks, here’s a quick Multiplayer Loadout guide for both the EM2 and the TEC-9.

The EM2 is a great new addition to the assault rifle class, the first to come equipped with its own low-zoom optic. Paired with its excellent firing stability, this weapon is well worth investing your time into. At mid-range, it can eliminate a target with four shots to the body. With a base ammo capacity of only 20 rounds, you’ll likely want a bigger magazine, but other than that it’s wide open for Gunsmith experimentation.

This one’s for Slums, one of the latest 6v6 Multiplayer maps introduced in Season Five, featuring clear skies and long sightlines around the perimeter.

We’ve equipped the EM2 with the 25.1” Reinforced Heavy for about double the effective damage range, as well as a big boost to bullet velocity; negate its penalty to your Aim Walking Movement Speed with Tactical Stock. Conceal your muzzle flash with the Flash Guard and equip the 25 Rnd Speed Mag for extra ammo and improved reload speed. Speed Tape reduces the mag’s penalty to your Aim Down Sight Speed.

Using Perk Greed, we’ve got six abilities. Engineer helps you better detect incoming enemy aircraft, while Forward Intel expands your mini-map for improved intel and awareness. With Quartermaster, you can continuously disrupt enemy vision via your Smoke Grenades and set fire to objective defenders with your Molotovs. Cold Blooded makes it easier to fire at aircraft without retaliation, and Ghost keeps you off the enemy map when moving around.

Eager to test out the EM2 right away? As we mentioned before, purchasing the Season Five Battle Pass Bundle in-game will shoot you forward in the system with up to 25 Tier Skips, more than enough to instantly unlock the EM2 and get you well on your way to our next weapon, the TEC-9.

The first semi-auto SMG in its class, the TEC-9 is the ideal weapon for fast, accurate play. Three shots to the body takes down enemy Operators inside of 20 meters; outside of that range, it can provide a four-shot elimination or three with a headshot. A fast trigger finger combined with the weapon’s high accuracy and low recoil can be absolutely deadly in the right hands.

Semi-auto not your style? Try the Burst Fire or Full Auto Repeater Muzzle attachments to speed up your fire rate, preferably alongside a magazine attachment that boosts your magazine capacity and/or reload speed. The first two attachments, 30 Rnd and Fast Mag, are both great options.

This is the perfect Loadout for Season Five’s theme of infiltration and sabotage, especially on the new Echelon map.

With Double Agents around, you’re right to be paranoid, so pick Paranoia to detect enemies outside your periphery. Use Gearhead so you can deploy the Jammer more often, and take over enemy Field Upgrades with Spycraft. Breach enemy-held objectives using your Stun Grenades and get in some trick shots with your Tomahawks.

Any melee weapon will work, but Season Five’s Cane is too stylish to pass up. Get it in the previously mentioned Stolen Goods Bundle or by completing its in-game challenge. In Multiplayer, that means eliminating an enemy disoriented by your Stun Grenade or Flashbang in 15 different matches… which could be done using this Loadout!

Whether you’re going to hammer through that Battle Pass or slice your way to unlocking the Cane this weekend, we hope you enjoy Season Five as much as we will in the coming days and weeks ahead.