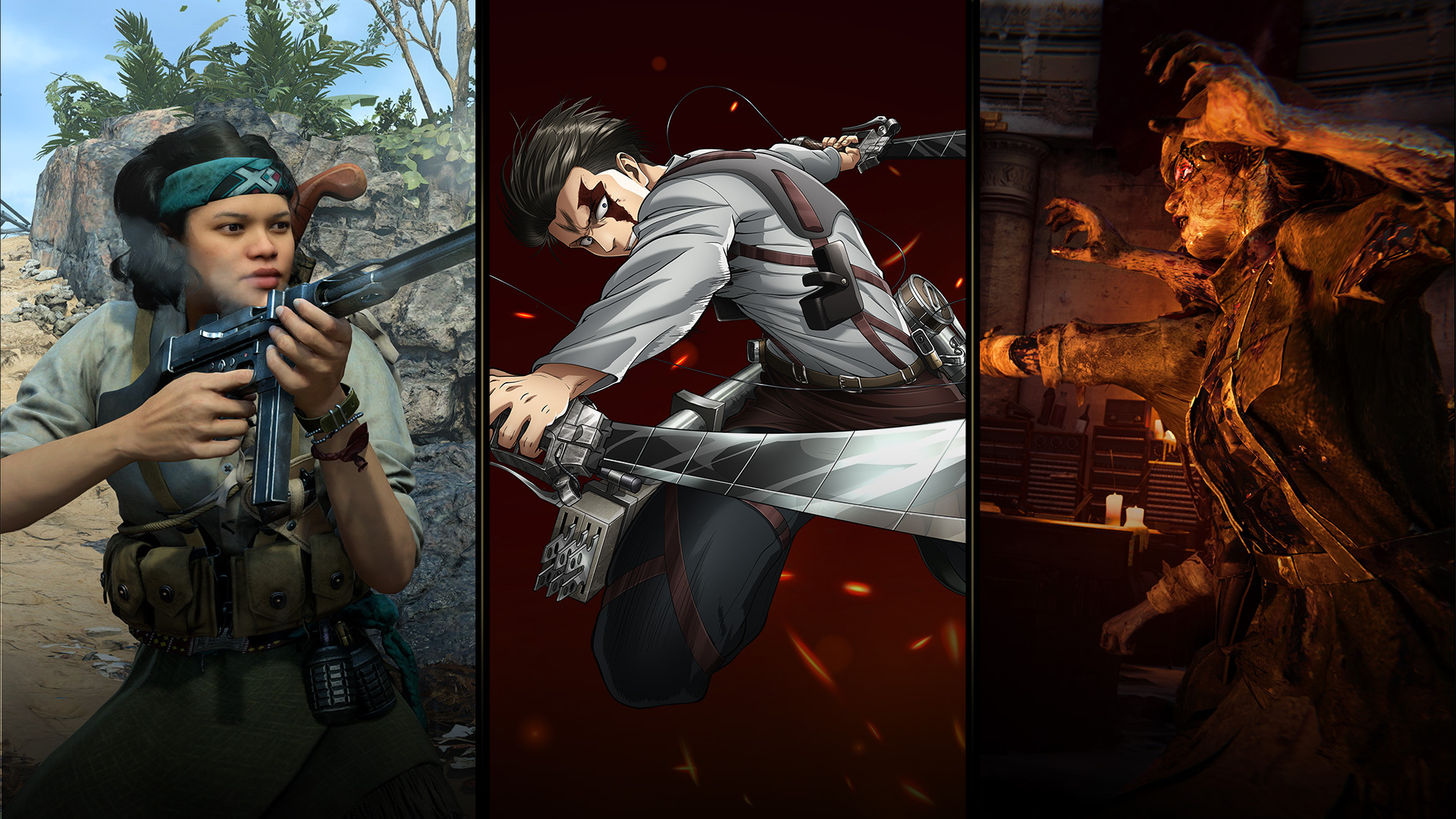 In celebration of its final season, Attack on Titan is collaborating with Call of Duty. Get the details on this first Bundle, inspired by Captain Levi Ackerman, as well as other updates coming during Season One.

The iconic best-selling manga series Attack on Titan, whose award-winning anime adaption just entered the second half of its final season, is coming to Call of Duty: Vanguard and Warzone Pacific as part of the games’ first major update of 2022.

In this bundle to be released as part of the midseason update, Daniel Yatsu will don the legendary Survey Corps gear.

This epic collaboration will officially become available on January 20, approximately one week after a midseason update for Vanguard and Warzone Pacific that will include a new Operator, a new weapon, additional content for Zombies, various bug fixes, and more.

The Vanguard update will be available to download on January 11, at 9 PM PT, while the Warzone Pacific update can be downloaded starting on January 12 at 9 PM PT.

These will prepare both games for the first full day of Season One’s midseason update on January 13 at 9 AM PT.

In celebration of Attack on Titan’s final season, Vanguard and Warzone Pacific players can become a Survey Corps member through the Tracer Pack: Attack on Titan — Levi Edition Bundle.

This 10-item Store Bundle is not just for superfans of the franchise; it has the style and firepower to become a leader among soldiers, just like Levi Ackerman.

One of the most notable additions to this Bundle is the “Titan Piercer,” a Weapon Blueprint that models the very blade that can slay Titans. Made of ultrahard steel, the only material that can cut through Titan flesh, this one-edge blade is more than capable of slicing through squads with ease.

Also available in the Bundle is the Legendary “Steel Cut” Finishing Move, as well as the Vanguard-exclusive “Vertical Maneuver” Highlight Intro and the “Ultrahard Steel” MVP Highlight.

The other two weapons in this Bundle are the Legendary “Historia” SMG and “Ymir Curse” Assault Rifle Weapon Blueprints, two firearms that are great additions to your Warzone Pacific or Vanguard Multiplayer and Zombies Loadouts.

“Ymir Curse” is built for Operators who pride themselves on accurate shots downrange. With a nine-attachment configuration, near-zero horizontal recoil, and almost-maximum effective range and bullet velocity, this Legendary Weapon Blueprint is phenomenal at a distance, especially when an Operator is mounted.

As for the “Historia,” it suits the run-and-gun Operator who wants to throw out accurate shots from the hip while sprinting. The included smaller-caliber magazines offer better speed and fire rate, perfect for Gung-Ho strategies across Multiplayer or Warzone Pacific.

Although any Operator can wield these weapons, Sgt. Daniel of the Hellhounds will be fully geared up for battle with the “Survey Corps” Operator Skin included in this Bundle. Fashioned in the style of Survey Corps gear worn by Captain Levi Ackerman, this new outfit is perfect for leading your squad to victory in Caldera or elsewhere, like the incredibly skilled, yet humble badass Levi is.

Superfans will also recognize the other elements of this Bundle and what they reference: a “Secret Keeper” key Weapon Charm to unlock the world’s mysteries, the “Wings of Freedom” Emblem worn with pride by Survey Corps members, and, of course, a “One Hot Potato” Sticker, in memoriam of a special person who we all hold very dear to our hearts…

Want to see more of the Survey Corps? Then be sure to watch Attack on Titan Final Season Part 2, which made its colossal return this past Sunday! The war on Paradis zeroes in on Shiganshina, and the truth of the world will soon be revealed. You can stream it now on Crunchyroll and Funimation.

A devastating invasion. A parent lost. A vow for revenge.

This is the story of Isabella Rosario Dulnuan Reyes, the final Operator on Task Force 006 Trident arriving before the end of Season One.

Isabella was trained in the martial arts as a young girl by her father. After his death, she continued to hone her skills on those who drove her into a local resistance. After the war, she joined Trident alongside Francis and Lewis to uncover Caldera’s secrets, acting as the close-quarters battle (CQB) specialist with extreme proficiency with a new weapon for the Vanguard arsenal.

Those who have all three members of Trident — Francis, Lewis, and Isabella — unlocked and leveled to the max can unlock a special Gold outfit for all three Operators, as well as a Platinum one if they have at least three other Task Forces maxed out to Level 20.

“Heavy full-auto SMG with lethality and range for short- to medium-range engagements.”

The Favorite Weapon of Trident’s Isabella, the Welgun is the prototypical SMG whose raw statistics slot it between the Owen Gun and the weapon that the British army chose over it: the Sten.

In Multiplayer, it can reliably down targets in four shots — or three, with a shot to a vital area mixed in — within a category-standard effective range. The available .380 and .25 ACP magazine attachments can either make it a powerful three-to-two shot machine or a faster-firing and more accurate weapon, respectively.

Whether it is used with its standard ammo in Extra Extended Magazines, which doubles its round count per magazine, or a 48 Round Drum of .380 ammo, close-quarters specialists can make it work in their standard Warzone Pacific or Vanguard Multiplayer Loadouts, especially in large squads or higher-intensity modes.

The Welgun can be unlocked in one of two ways: either through an in-game challenge or through a Weapon Blueprint, the first of which will be available with a Store Bundle – Reserved Steel – to be released within this update’s launch window.

Several major updates to Vanguard’s Zombies experience will appear in 2022, with Treyarch outlining the immediate additions to the mode and future plans in their most recent blog.

These include the introduction of never-ending classic gameplay to “Shi No Numa” in the new Void Objective, unlocked access to Von List’s Office in Stalingrad, four new tiers of Artifact upgrades at the Tome of Rituals, three unique Pack-a-Punch camos, and more. The Combat Shield and craftable Support Killstreaks are also being added to the mix, along with weapon unlock challenges for the Katana and new Welgun SMG, plus plenty of content in the works for Season Two.

Visit Treyarch’s blog for more intel on everything you need to know about Zombies for this update and beyond.

Sledgehammer Games and Raven Software, in addition to Beenox, High Moon Studios, and Toys for Bob among others, are committed to supporting Vanguard and Warzone Pacific during Season One and beyond, actively listening to concerns, bugs, and requested features from the community.

Expect Vanguard’s patch notes for this latest update to release tonight on Sledgehammer Games’ blog, and Warzone Pacific’s patch notes will go live on Raven Software’s blog on January 12 prior to the game’s update. These blogs will also be found on the main Call of Duty website and will be promoted by official accounts.