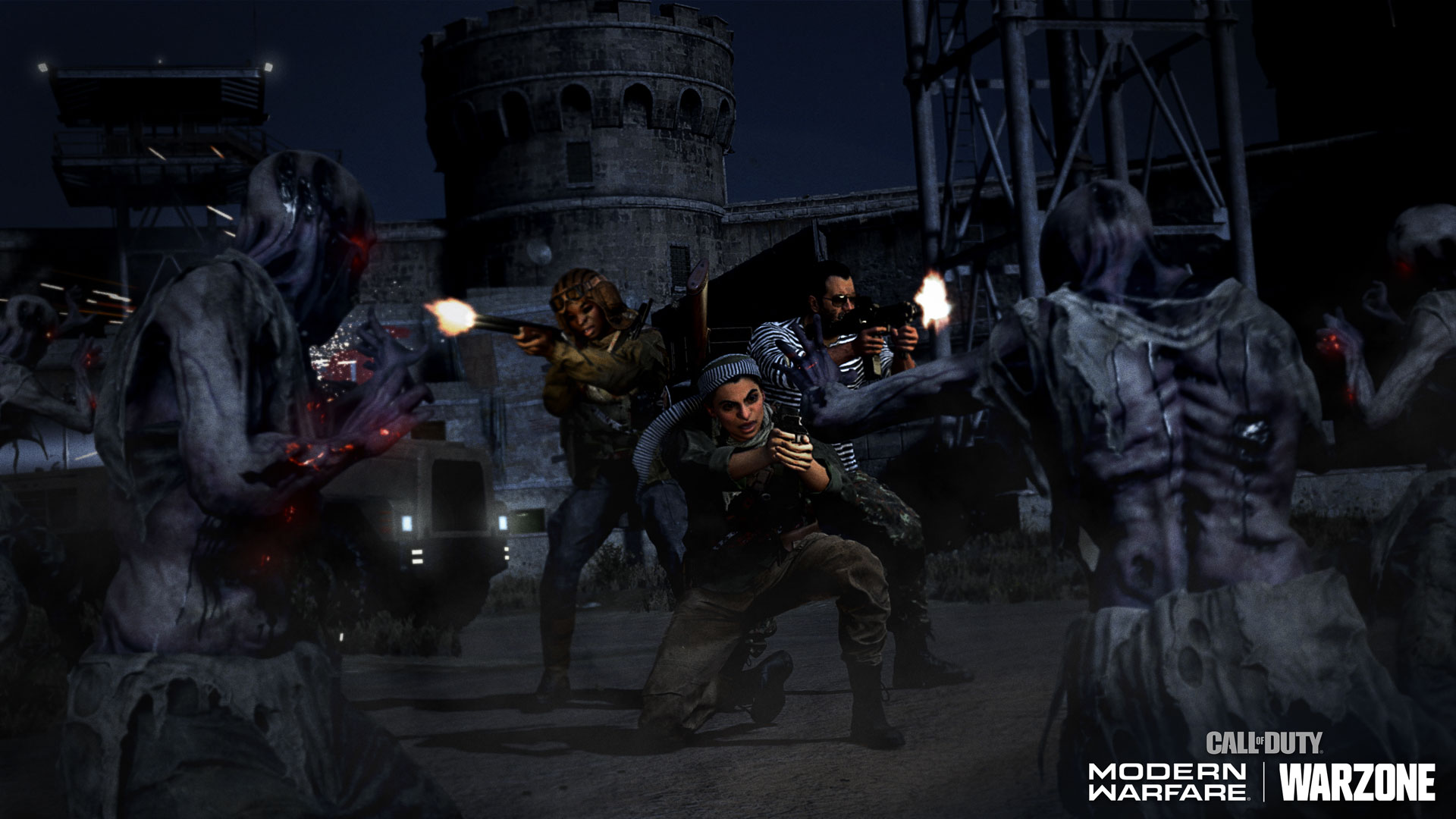 The latest new limited time game mode has arrived and is set to unleash the undead masses like never before. Where night has fallen on Verdansk and the dead walk the earth, welcome to the Zombie Royal.

In Zombie Royale, dead Operators skip the Gulag in favor of rising again as an agent of the undead. Seek revenge with special zombified abilities to aid you in bringing down the remaining “living” Operators, and be prepared to jump on every victim you can: Particularly adept undead can expect transformation from zombie back into the world of the living, returning to finish the fight as an Operator again.

Read on for more information including tips and strategies for all players (living and undead).

Like the regular Battle Royale, the Zombie Royale experience is all about surviving to the end as the last team standing, and in this case the last team with a living Operator standing.

The mode supports 150 players organized into Trios, and just like in the standard Battle Royale experience, the circle collapse will enclose Verdansk in an ever-expanding field of gas.

It’s nighttime in Zombie Royale, so deploy and keep your senses sharp as you scavenge for weapons, equipment, and cash. If you’re taken out, you’ll respawn as a zombified Operator with special abilities and a primary objective: land the killing blow on two live Operators, collect their syringes, and earn your life back.

What exactly are these special zombie abilities? Let’s take a look.

Undead and Loving It: Zombie Abilities

Undead Operators are far from the shambling, moaning shotgun fodder; in this mode, those who die return as deadly zombified horrors with unique skills and abilities which let them punch well above their weight (or lack thereof) against the living.

Here’s what undead operators can do:

Zombified Operators don’t feel the effects of fatigue and thus enjoy a passive increase to their movement speed along with stronger melee attacks. When you close the distance and start striking, it won’t be long until another zombie is added to the ranks.

Due to their nocturnal nature, the undead also benefit from advanced vision. Live Operators are more clearly highlighted in a zombie’s field of view, and their footprints remain momentarily visible to the undead, similar to the Tracker Perk that normal Operators have. In other words, the living can run, but they certainly can’t hide.

Being undead also grants the benefit of immunity to the gas. Toxins can’t hurt you when you don’t breathe. See those Operators skirting the edge of the circle? Give them a nice scare and run out at them where they least expect it.

These zombified Operators are a much more deadly breed than your average drooling corpse. Especially as the Verdansk undead have access to three active abilities.

Using an active ability initiates a cooldown period before that ability can be used again.

Be prepared as zombified Operators are a force to contend with. While playing as the undead, however, you’ve still got to play tactically, especially as zombies are too fragile to equip any armor.

Disorient your enemies and then flank them. Also note that when a player is killed, they drop a syringe that shows up on the map. Collect two of these Syringes as a Zombie and you’ll parachute back in with your loadout on your Squad for a second chance!

Remember: the last team standing with a living Operator wins. As you near the endgame, it becomes more and more likely that your squad will end up with a mix of living and zombified Operators. As the circle collapses into an ever-smaller area, zombified players can help their live teammates by swarming enemy squads.

A zombie cannot harm another zombie, so the best way to assist your team is to go straight for live Operators still competing for that victory exfil. Get in their way and block their view as your live teammate opens fire or attack them from behind as they’re engaged elsewhere.

As always, communication is key. Coordinate your efforts between the living and undead and you’ll be one unstoppable force of terror.

The undead aren’t the only ones joining in on the eerie festivities for The Haunting of Verdansk. Within this limited time mode, expect to see some strange phenomena around Verdansk at night, and keep your eyes open for Trick or Treat Supply Boxes.

Open these boxes for the chance to earn universal rewards like blueprint weapons and emblems… or get tricked with something truly terrifying. Just don’t let your excitement over a little Trick or Treat get you killed by an encroaching zombie.

5. Lighten Your Load. With zombies enjoying a boost to their speed as well as a Charged Jump ability, live Operators may want to trade in their heavy weapons for something that keeps them more fleet-footed. Get an SMG or shotgun in your hands and consider including Double Time in your Loadout Drop.

4. Disable, Disorient, and Attack… As a zombie, you want to do everything in your power to disrupt enemy Operators before you lunge for the attack. Activate your EMP Blast ability when you’re getting close to a target to destroy nearby equipment, follow that up with the Gas Grenade to disorient them, and then attack while they’re at their most vulnerable.

3. …or Just Attack. It’s all about reading the situation. In some instances, using your EMP Blast and Gas Grenade is too long of a setup, or maybe they’re on cooldown from the last fight. If there’s a nearby Operator who’s open to attack, forget your opening abilities and go straight for the kill.

2. Pedal to the Metal. Getting surrounded as you’re out looting Supply Boxes and picking up Contracts? Live Operators should consider picking up a vehicle or two early in the match. You never know when you’ll need a quick getaway from the approaching horde…

1. Begin the Cycle Again. It’s always a good plan to buy back a teammate who has been eliminated from the game, but in Zombie Royale it’s a vital strategy. Not only will your teammate be reinvigorated as a live Operator, but should they fall again, they’ll join the undead ranks once again, where they can continue to serve the squad…provided there’s still one left standing.