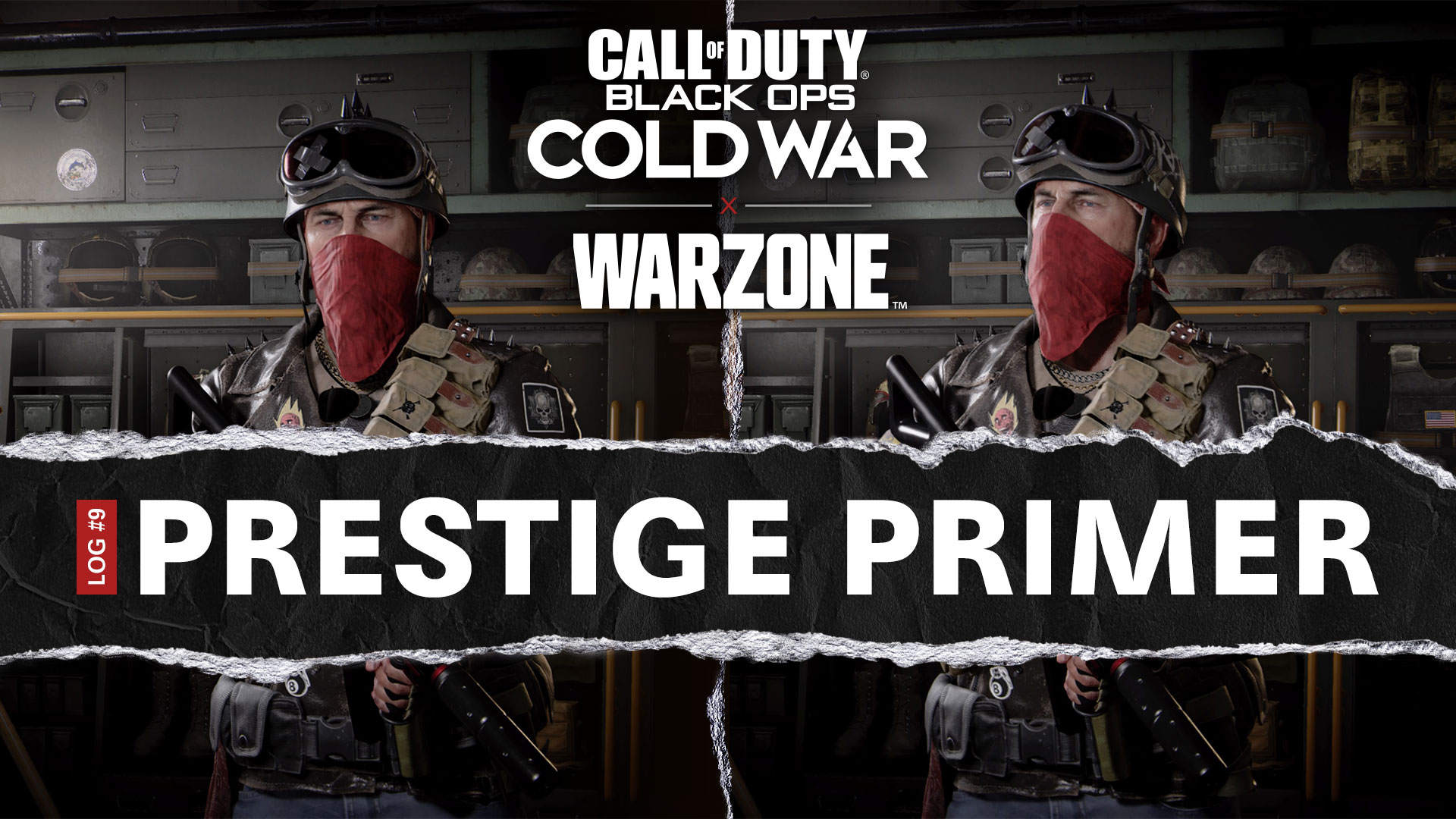 Need some help with Season One’s Season Challenges? We have tips on the first 10 across Call of Duty®: Black Ops Cold War and Warzone™, as well as a weapon that helped us accomplish these feats.

In the previous Prestige Primer, we detailed how to conquer the 10 toughest Zombies Season Challenges out of the 20 in Season One. This week, we tackle the first half of the initial 20 within Black Ops Cold War Multiplayer and Warzone to unlock before the season’s over.

Get ready to drop into Verdansk, Rebirth Island, and over a dozen more locales in Black Ops Cold War… and let’s level up:

Does the Prestige Primer like to joke around? That’s a clown question, bro.

Although we could make a “Big Joke” about Baker’s new skin released last week, our featured Operator this week is the “Biker” Frank Woods, who just raced to the front of the Store’s featured Operator bundles today as part of the “Demon Dog” bundle.

It may not be a familiar look for Woods, but if someone had to infiltrate the ranks of a notorious biker group, you would be hard-pressed to find a bigger badass than the one raised in the streets of Philadelphia and forged from multiple tours of duty.

The “Demon Dog” bundle also comes with two Weapon Blueprints, including a Legendary assault rifle, as well as a new Finishing Move, Calling Card, animated Emblem, and vehicle horn that’s fit for raising hell around Cartel or Ruka with the Dirt Bike (or any vehicle across Black Ops Cold War and Warzone).

If you need a checklist for becoming a Season One Master – and for all following seasons – then here’s a look at our personal benchmarks:

– Achieve Tier 100 of the Battle Pass (unlocking them isn’t necessary, but if you already made the progress, you might as well have the rewards)

In reaching Level 200 for the season, you’ll unlock all 40 of those Season Challenges, as you’ll get the first for both Multiplayer and Zombies at Level 1, then one every 10 levels, starting at Level 10. Doing all of that should get you to Tier 100 of the Battle Pass without a problem, and we already covered the toughest Zombies Season Challenges for Season One in the last Prestige Primer.

So, until we start shooting for Level 1,000 (and don’t worry, we’ll have tips for that before this season’s end), let’s knock out the final item on our checklist: The Multiplayer Season Challenges. Technically, these are “Multiplayer and Warzone” Season Challenges, as some of them are directly tied to tasks within Warzone, and most can be progressed in either mode.

With that in mind, here’s the list and our advice for the first 10:

In either Warzone or any vehicle-heavy Multiplayer mode, one way to complete this challenge is to plant the C4 on a vehicle, hope the enemy player doesn’t notice, and catch them by surprise once they hop in.

Alternatively, you could bait an enemy vehicle into running right into a C4 blast, or play chicken by tossing a C4 package in its path and quickly getting out of the way.

Just be sure to check for Trophy Systems, lest they intercept your C4 and leave you empty-handed.

As you chase the Annihilation (Quad Feed) challenge, this should come naturally. Whether it’s facing a duo (or more) in Warzone or the enemy team in Multiplayer, be smart by keeping health and armor in check, but don’t be afraid to be aggressive.

In Warzone, try to rack up $4,000 in Cash before the first circle collapse and book it to a Buy Station. That way, you might catch more teams before they go undercover with Ghost.

In Multiplayer, Field Mics can be quickly charged with the Gearhead Perk to get more out into the map during gameplay.

Keep your eyes to the sky on this one – usually in squad-based Battle Royales, Most Wanted players like to grab a helicopter and wait out the clock. It’s a good strategy (which you can use) but can be easily foiled with some lock-on launchers.

Alternatively, if a Most Wanted player is moving normally, always assume their teammates are still alive. It’s better to plan for a team fight than to be surprised when one Most Wanted has their three partners in crime waiting to pick up some scraps.

The easiest challenge on paper with the most rewards.

This will be completed naturally, but if you have any Double XP tokens handy, be sure to pop one before hitting one of the five milestones to double up on a serious XP jackpot.

In Warzone, the final circle can be a gold mine for this objective. Alternatively, go for the tops of tall buildings where snipers love to congregate and call in those Precision Airstrikes.

In Multiplayer, try playing respawn-heavy objective modes, such as Domination, and calling in Napalm Strikes or Artillery directly on an active objective. Otherwise, there is no shame in dropping a Care Package while using the Engineer Perk and pressing your luck for a re-rolled VTOL Escort or Gunship.

Two technicalities will help here: “eliminations” and “while seated in a vehicle.”

First, so long as you get damage on a target, it counts as an elimination, so assists can work. Then, operating a turret or driving the vehicle both count as being seated in it, which may lead to easier eliminations than trying to shoot out of one while it’s moving quickly.

We have a whole guide dedicated to surviving the Gulag here. Do that 25 times, and this XP is yours.

While the occasional AFK Operator doesn’t hurt, one recommendation for “easier” Finishing Moves is to perform them on downed opponents, especially if they ran from their pack for an aggressive play or in Solo games when they have a Self-Revive Kit.

Operators in a downed state have zero defenses outside their teammates and turn slower, allowing you to perform a back attack more easily.

No matter how you attempt to get these, remember to HOLD the melee button to perform a Finishing Move. Otherwise, that enemy will only be slightly annoyed rather than eliminated in style.

Another easier challenge that has an XP reward to bank a Double XP token on.

Still short on eliminations in Warzone? Try playing Plunder with the Kill Chain Perk to get more chances at Killstreaks, or attempt to earn some of the more powerful Scorestreaks in Multiplayer, such as Chopper Gunners and Gunships, that can easily rack up eliminations in a short period of time.

Following the Prestige Primer celebrating the February 4th update, expect to find strategies on the final 10 Multiplayer Season Challenges for Season One.

In pursuit of these challenges, along with some in the later levels, we found ourselves gravitating towards the new “Widowmaker” SMG Blueprint found in the “Tracer Pack: Rouge” bundle.

What makes this weapon pop for us is those red tracer rounds, which is fitting for a weapon that will have an enemy seeing red in only fractions of a second.

Even before this Blueprint dropped, we’ve used that attachment configuration plenty of times across all modes. The Agency Suppressor is phenomenal for controlling recoil while staying under the radar, and in Warzone, the added range bonus is a definite plus. The Foregrip helps with Horizontal Recoil, Speed Tape is for faster aim down sight (ADS) speed, the Duster Stock makes for faster slides, and the Quickdot LED is becoming a popular Optic around the community. As-is, this is an SMG built for snapping quickly down sights and downing targets with fast fire.

However, in our experimentation, we found a few suggestions for alternate attachments, which could also be additional choices to slap on with these five if the Gunfighter Perk is used:

No matter how you configure this weapon, we found this SMG to help us rack up Scorestreaks and multi-kills when using it aggressively. Push often, aim true, and don’t get too distracted by those pretty red tracers.