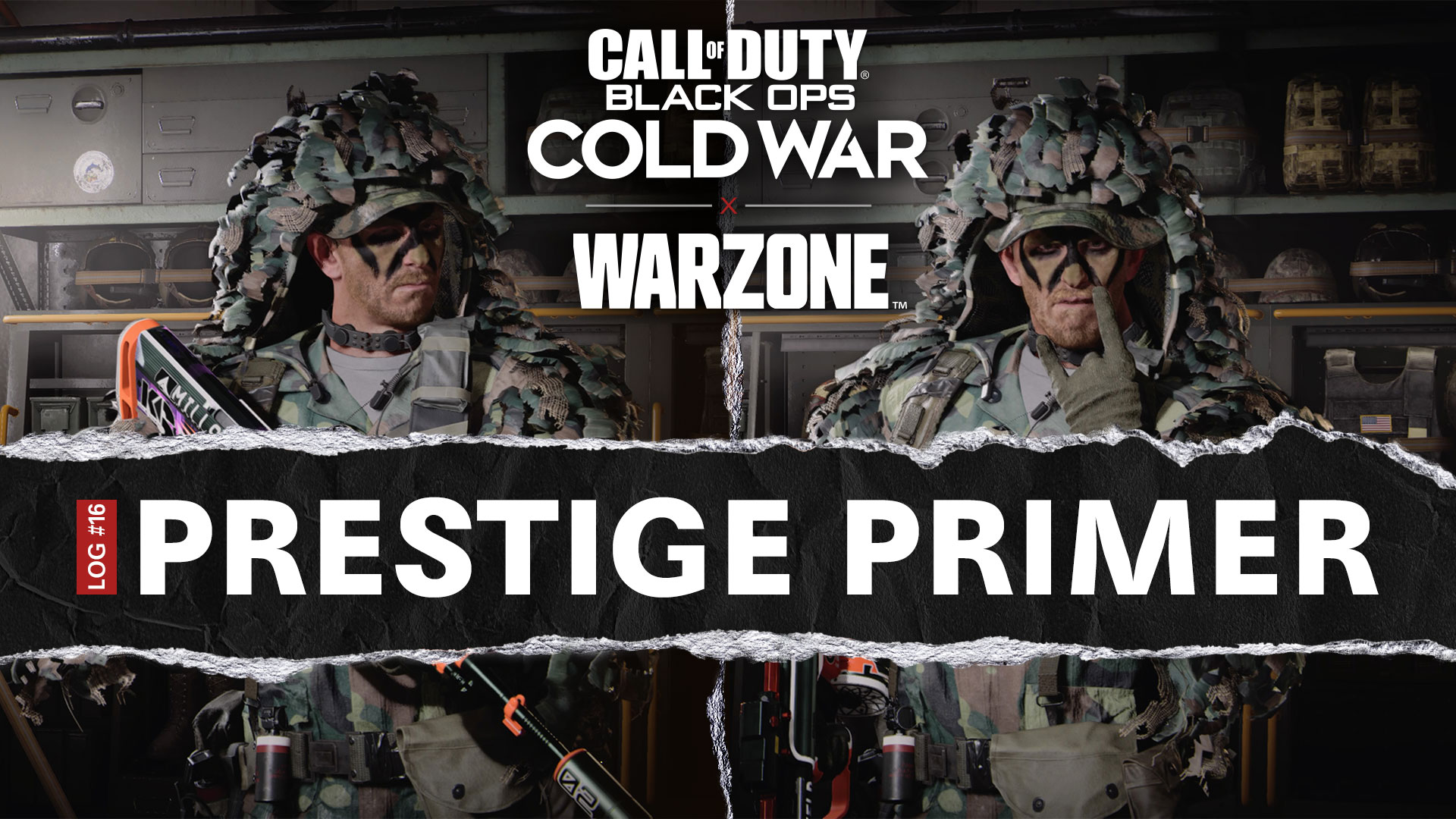 Mid-way through Season Two, we’ve got some tips for completing the first half of the Multiplayer Season Challenges, including the tough “Cybersecurity Threat” and “Brap Brap” objectives, as well as a look at a meta-changing weapon in Warzone.

Season Two is so much more than the zombie invasion in Verdansk and elsewhere across Call of Duty®.

Of course, while the threat of an undead apocalypse and the new Outbreak mode have us chomping at the bit for fighting those who feed on flesh, Season Two already has plenty to offer within Black Ops Cold War Multiplayer, plus three more maps coming later this season.

With that in mind, let’s tackle the new challenges that await us in Multiplayer… and let’s level up:

During Season Two, you may have noticed that NATO’s John Baker, the Navy SEAL Sniper, has a new Ghillie Suit. If not, then he’s doing a great job of blending into his surroundings.

The “Quickscope Sniper” bundle dropped in Store earlier this season, and we wish we would have highlighted it sooner, given what it includes for Baker and for our loadouts. Not only does this bundle include Baker’s new Legendary “Shrub” skin, it also has a deadly new Finishing Move, a Reticle, a few cosmetic items, and two Weapon Blueprints, including a “Canvas Cloak” Legendary Sniper Rifle built for faster ADS kills.

It’s become our weapon of choice while chasing an awesome Quad Feed to show off around the community, and its design is a perfect pairing with our Featured Operator for the week.

Last week, we covered the first 10 Zombies Season Challenges for Season Two, as we are roughly halfway to Prestige Master like many Operators out there. This week, we have our sights set on 69,000 XP and 10 Calling Cards that can be earned in Black Ops Cold War Multiplayer and Warzone.

Here’s our advice for earning all of that through the first 10 Multiplayer Season Challenges:

Protective Overwatch (Level 1) – Use a Sniper Rifle to kill an enemy who is injuring a teammate 10 times – 2,500 XP

We completed this challenge naturally through Multiplayer and Warzone, allowing our more aggressive teammates to push up against the enemy before we dealt the eliminating blow.

For all sniper rifles in Black Ops Cold War Multiplayer, enemies will be easier to eliminate with shots to the head and upper chest, so aim high, hold your breath, and take the shot when your squadmate is in peril.

Warzone’s Plunder mode is a great place to complete this, as you’ll be frequently dropping into action due to respawns. Otherwise, drop onto contested objectives in Sanatorium, Alpine, or Ruka in one of Black Ops Cold War’s multi-team playlists to get this one done in a snap. Treyarch’s upcoming 40-player Hardpoint mode should be especially effective for this particular challenge.

Tough in theory, but not if you remember that surviving the beginning of any Warzone match typically requires picking up weapons from the ground and from Supply Boxes.

Keep dropping into Verdansk, swap that starting pistol ASAP, and this challenge will be over before you know it.

Alternatively, Multiplayer Operators will want to get into the habit of swapping their Secondary Weapon out with whatever their enemies drop after they are eliminated. This should be easier as a match progresses, since there will be more weapons on the ground to pick up and fire.

This is another challenge that should be completed naturally just by playing the game, although if you are having difficulty, we recommend pulling back and playing with long-range weapons.

Aggressive players may get scuffed up in close-quarters combat, so using weapons that excel at a distance can help you take down targets without getting bloodied. Just be sure to hit your shots, lest you become a sitting duck for a CQB Operator on the prowl.

This season challenge should be a great incentive to get started on your road to earning Diamond camo on your LMGs.

If you have yet to try this primary weapon class yet, prepare to use some high-capacity and high-caliber weapons that are incredibly effective against vehicles and large infantry groups. Our recommendation? Keep those engagements stretched out beyond 15 meters, and make sure a squadmate is covering you during those long reloads.

Note: this challenge overlaps with the second objective in Naga’s Tier 0 Operator Mission, which only requires you to get 5 kills with Molotovs.

Molotovs are great when used on objectives and chokepoints in tandem with a few well-placed bullets, as Operators will get burned while moving through these key areas. Alternatively, you can opt to be more precise and directly hit an Operator with a Molotov, which can be a guaranteed kill against them.

This may be the trickiest challenge to complete in Season Two, even with a bit of planning.

First, remember to not only equip Spycraft on your loadouts, but also Engineer; the latter Perk highlights enemy Field Upgrades in bright red light, even through walls. Next, try playing objective game modes, where Proximity Mines and Gas Mines might be more common in high-traffic areas, such as in chokepoints and around key objectives.

Then… it’s all about patience. Keep hacking those mines and lure enemies over to them by making noise around it. If they are foolish enough, they may just walk into their own teammate’s trap, giving you a much-deserved 2,500 XP and a Calling Card for this difficult feat.

Using shotguns as they were intended to – in extreme close-quarters – is the name of the game here.

Out of all the attachments that can help make this challenge easier, the Task Force Barrels are basically designed for Point Blank Kills, since they reduce range but substantially increase damage. Equip one of these to your shotgun of choice, and you’ll be ready to get up close and personal with the enemy.

Another challenge that may not require straying too far from your regular Multiplayer or Warzone strategy, but if you want to get this done quickly, Supply Run Contracts may help.

Each completed Supply Run Contract offers a hefty discount on one Buy Station purchase, including Precision Airstrikes, UAVs, and Cluster Strikes that will wind up costing only a few hundred bucks. So long as you’re quick enough and avoid squads hunting vehicles, this could be an effective way to rack up Killstreaks quickly.

While “Cybersecurity Threat” is difficult in terms of a single objective, this challenge may be Season Two’s toughest in terms of length.

Our advice for getting multiple kills in quick succession is to play Multiplayer aggressively – something that an SMG is naturally great for – and play on smaller maps, such as the new Apocalypse map, Nuketown ’84, and especially the hectic Face Off maps like Game Show and ICBM.

Above all else, this should give you another excuse to try out the new LC10 from the Battle Pass, so give it a go once you unlock this Season Challenge!

This week, we shift focus back to Warzone and highlight a weapon that just got a new Ultra Reactive Blueprint in the Store.

“Racer 02” can be found within the “Super Charged Reactive” Bundle, and comes with four attachments that give you a rolling start on a phenomenal loadout across all game modes.

For our purposes, we decided to tune this weapon for pole positions in Warzone:

Over the past few weeks, we’ve seen Warzone players use this weapon within their top loadouts, relying heavily on the Agency Silencer, 19.8” Task Force Barrel, and choice of high-powered Optic.

The Task Force Barrel plays into this weapon’s strengths as a mid-to-long range burst weapon, buffing its Damage, Effective Damage Range, and Bullet Velocity. Those range and velocity benefits are even more amplified thanks to the Agency Silencer, which also adds some Vertical Recoil Control for keeping burst patterns tight, and keeps Operators off the Tac Map as a silencer. As for the Optic, it helps in acquiring targets further down range with a clearer sight picture.

This specific configuration does stray from “typical” elite set-ups for this weapon in two key areas: the Underbarrel attachment and the lack of an extended magazine.

Typically, this weapon is seen with a 45 RND Drum Magazine, as the 50% increase in ammo capacity per magazine allows for leeway in squad-based game modes or multi-squad fights. In Solo modes, however, one could argue the benefits of those 15 extra bullets could be outweighed by that of a Raider Pad, which massively increases Sprint to Fire, Aim Down Sight Firing, and Aim Walking Speeds to help fast-paced playstyles.

Furthermore, we often see the Field Agent Foregrip used for its reductions to both Vertical and Horizontal Recoil. Instead of that, we threw on the SFOD Speedgrip to become even more aggressive, as we get a substantial increase to Sprinting Move Speed while still getting great Horizontal Recoil Control.

All of this is in the name of experimentation. Just because an exact “popular” set-up exists does not always mean it’ll be your perfect configuration. In fact, we’d even use the weapon’s built-in Optic and throw on a Handle Wrap for faster Aim Down Sight speeds, if we wanted to lean even more heavily into close-to-mid range combat situations.

So, when trying to go with the meta, don’t be afraid to take a few games and swap some attachments out, or even try different weapons in your loadouts. Who knows? You might just get ahead of the curve and become a Warzone trendsetter.