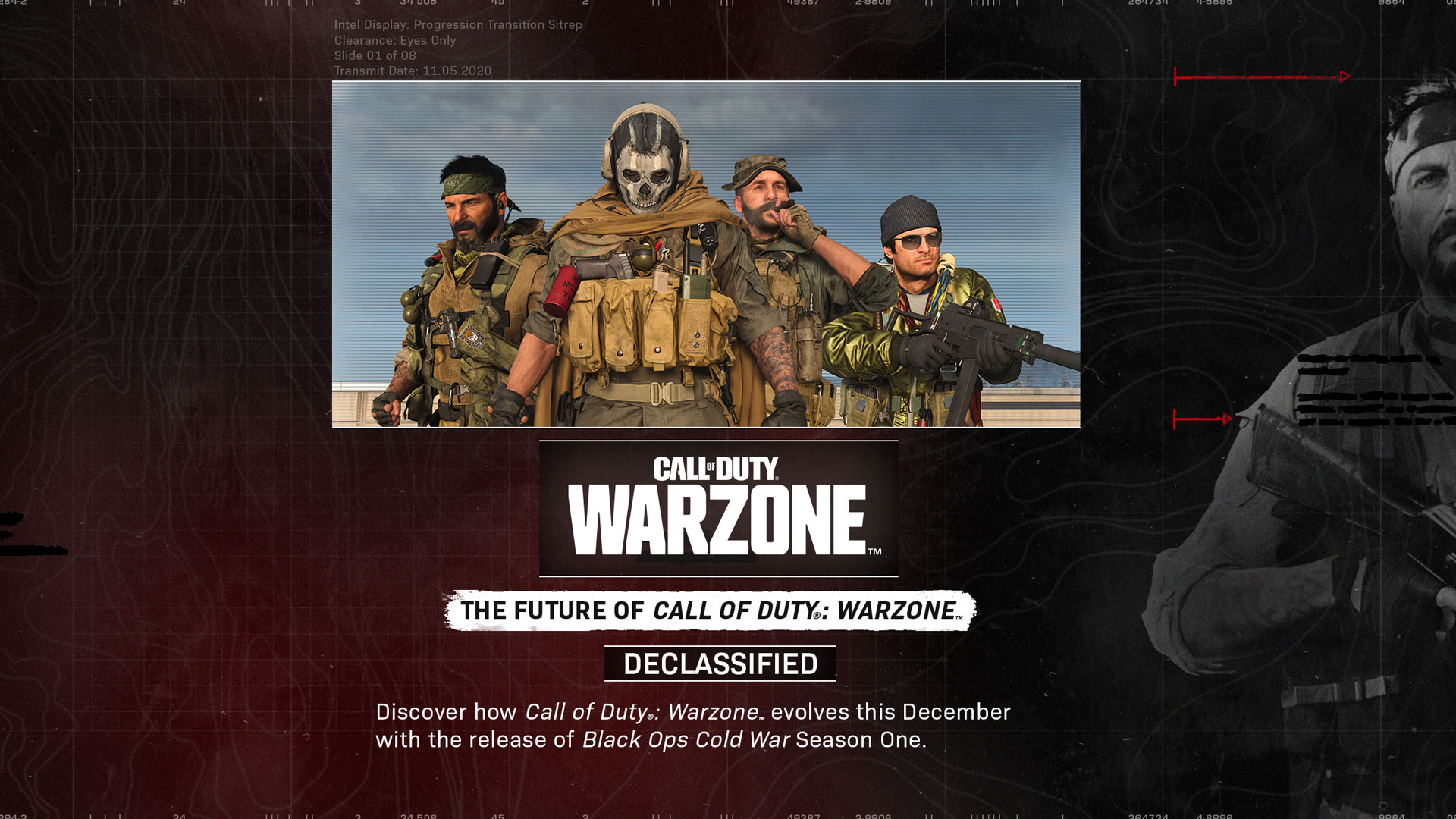 Call of Duty: Warzone, the hit free-to-play, free-for-everyone online experience developed by Infinity Ward and Raven Software that has dropped millions of players into the fictional world of Verdansk has big plans for the future.

How does all of this content work together, and what lies ahead for Call of Duty: Warzone? The following information showcases the many ways you’ll be able to share content, level up, utilize weaponry and equipment, and interact across all three titles Warzone, Black Ops Cold War and Modern Warfare.

Prepare for initial intel on:

In addition, there is a huge amount of free content coming to Black Ops Cold War, including maps, weapons, modes, and more, making Season One the start of the biggest series of ongoing post-launch free content drops in Black Ops history!

Additional Intel: On November 13th, Black Ops Cold War is set to launch with an updated player progression system. Players will begin by completing Military Ranks, a traditional leveling journey to unlock functional gameplay items. Once completed, Black Ops Cold War players will enter an updated and improved Season Leveling that begins at game launch with the Pre-Season, and which becomes synchronized with all three games at the beginning of Season One on December 10th.

At the launch of Season One in December, the path to gaining XP and leveling up will be shared across all three Call of Duty titles: Black Ops Cold War, Modern Warfare and Warzone.This Progression system is both familiar and innovative, allowing you to level up in all three titles no matter which game you play.

Initial Briefing: At the start of Season One expect every weapon from Modern Warfare and new weapons from Black Ops Cold War to be accessible in Warzone, including Blueprints and camo variants. Mix and level up weapons both in Warzone and the game the weapon originated from.

Welcome to the largest weapons arsenal ever seen in Call of Duty!

Additional Intel: Every weapon you’ve unlocked in Modern Warfare, as well as every weapon you’re going to unlock in Black Ops Cold War, is planned to continue to be available in Warzone. This includes Modern Warfare Primary and Secondary weapons (including Blueprint variants). The current plan is for Warzone to also include all Primary and Secondary weapons available throughout the lifespan of Black Ops Cold War, including launch and Season weapons, as well as every single Weapon Blueprint. Naturally, this includes the assortment of free weapons you received during every Season of Modern Warfare, just for playing the game.

In the Warzone Weapons menu, look for visible Black Ops and Modern Warfare logos on every weapon’s menu tile so you can immediately tell where your armament originated. When you earn or unlock a new weapon in Black Ops Cold War, it immediately appears for use in Warzone.

In short: You’re going to need a bigger Gunsmith table.

Today was a good day to bring two AKs into Verdansk: One from Modern Warfare and one from Black Ops Cold War.

Initial Briefing: At launch, take any Operator you’ve unlocked from Modern Warfare or Black Ops Cold War into Verdansk, including any earnable and unlockable skins.

Additional Intel: With the advent of Black Ops Cold War Operators entering Warzone on November 13, expect an Operator select screen with more choices than ever before relating to who you’ll take on your next mission into Verdansk. As expected, Operator access is on a per title basis:

Woods and Garcia, ready for the drop. Take any unlocked Operator from Black Ops Cold War or Modern Warfare and enter Verdansk.

Additional Intel: Black Ops Cold War and Warzone will share post-launch seasonal content through the Battle Pass system (including free tiers of content) and the Store.

Initial Briefing: A vast majority of content purchased in Black Ops Cold War can be used in that game as well as Warzone.

Additional Intel: From the start of Season One, players will be able to access the in-game store, and use their COD Points to purchase a wide variety of cosmetic bundles. Each title’s in-game store will be carefully curated to feature content available to play in that game. Items also available to be played in Warzone will be clearly labeled.

Warzone Store: This store offers a mixture of content from both Black Ops Cold War and Modern Warfare games, nearly all of which can be utilized in Warzone and the game for which it was designed. All items will be clearly labeled.

Additional Intel: Experience the next generation of global combat as one community, regardless of the platform or console generation you play Black Ops Cold War, Warzone, or Modern Warfare on, as detailed in this blog post.

Cross-Title Access: No matter what game you are playing – or the platform you’re playing it on – access and invite your friends to join you. Cross-Title Invites allow you to invite your friends who are playing Modern Warfare or Warzone to join you in Black Ops Cold War, and vice versa, with the party leader navigating to the title everyone wishes to play. The result is more flexibility and ease in gathering your friends for a Multiplayer match, Zombies experience (in Black Ops Cold War), or drop into Verdansk.

As the Black Ops Cold War Seasons progress and the Warzone story unfolds, be certain that our teams are working diligently to ensure all of this content is accessible. There are no current plans to remove content from Warzone but to ensure the best possible player experience, there may be occasions where content is delayed, or becomes temporarily or permanently inaccessible.

We can’t wait for you to play Black Ops Cold War content in both the main game and Warzone, along with all the Modern Warfare content you accrued along the way!

Stay frosty and execute the mission.