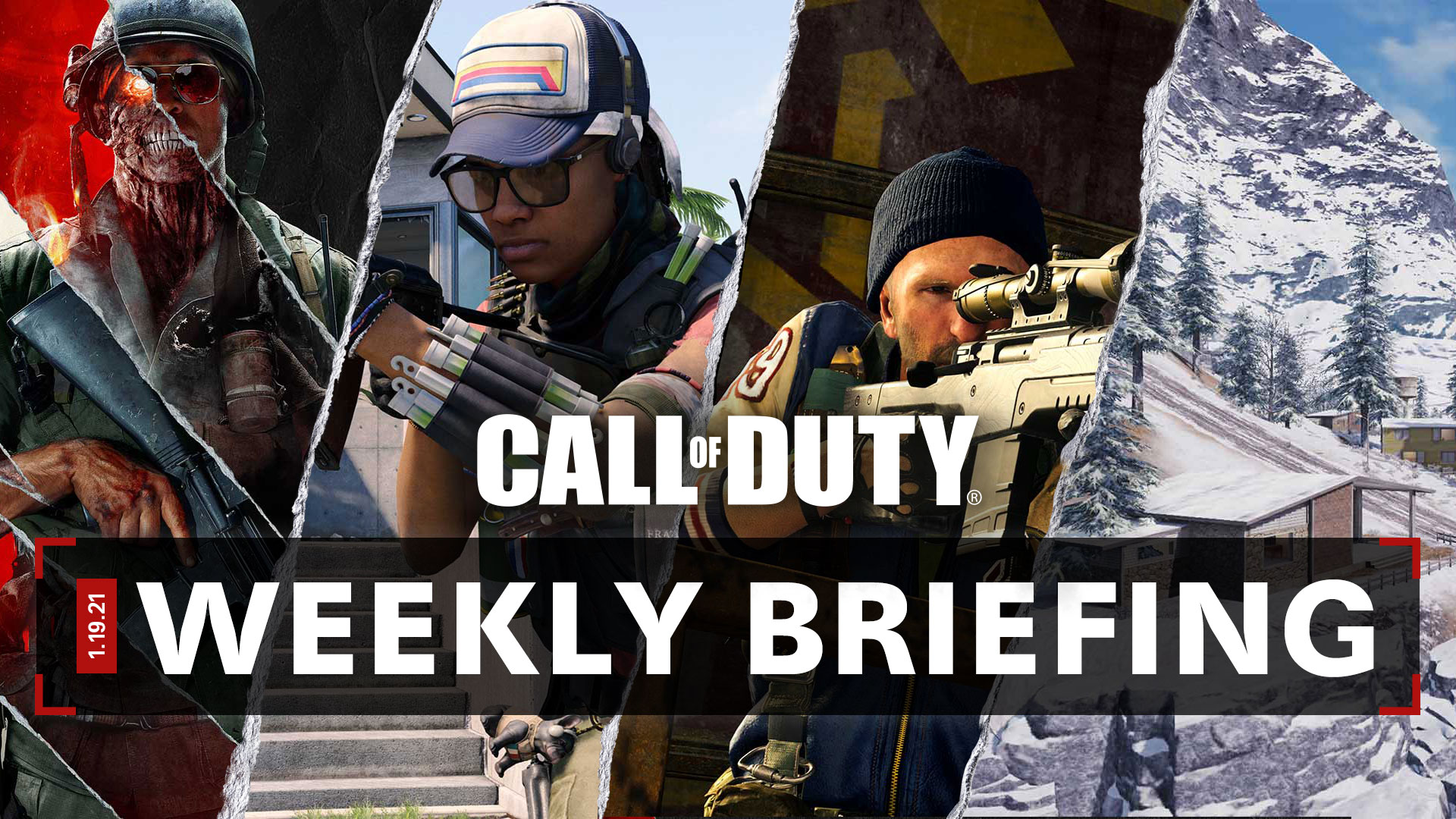 The Zombies Free Access period continues in Black Ops Cold War, Call of Duty: Mobile kicks off its Snow Day Event, and a new Operator joins the fight during this exciting week in Call of Duty.

With Double Weapon XP Weekend wrapping up in Black Ops Cold War and Warzone, we hope you got your arsenal ready for the week ahead in Call of Duty.

Following last week’s update to both games, there are some fresh new playlists to conquer and a few new bundles to check out. Plus, over in Call of Duty: Mobile, get ready to shred in Ski Town following its totally excellent expansion, as well as participate in the game’s Snow Day Event that has four exclusive rewards on offer.

Here’s your full intel briefing on the upcoming week in Call of Duty:

There are only a couple of days left to experience Black Ops Cold War Zombies for free through Zombies Free Access Week.

Available through your platform’s first-party store, this limited-time free access period is your ticket into exploring an abandoned WWII-era laboratory in Poland and the dark secrets it hides in “Die Maschine,” and beating the clock in Cranked.

These modes can be played solo or with up to three other Requiem members, including those who have the full game, so get a taste of this thrilling co-op mode before grabbing the full experience, where all your progress will carry over.

Along with the continuation of Cranked in Zombies, Black Ops Cold War Multiplayer will also feature the new Dropkick mode through Quick Play.

As for featured playlists, the Snipers Only Moshpit will be open to all sharpshooters starting on January 21. This moshpit of 6v6 Team Deathmatch and Domination will not allow you to use any weapons other than sniper rifles, and restricts lethal and tactical equipment, as well as Scorestreaks based around weapons like the War Machine, making these matches pure tests of skill and pinpoint accuracy.

What’s in Store for Black Ops Cold War and Warzone

Zeyna Ossou is en route to the DZ.
NATO’s wild card motorhead arrives on January 21 with her debut “Zeyna Operator Bundle.” Along with this Operator and her “Nitro” skin, this bundle includes three Weapon Blueprints. Two of which – an LMG called “The Cleaver” and “The Scalpel” SMG – are both Legendary, while the “Finishing Touch” is an Epic melee weapon that turns the combat Knife into a sleek switchblade.

Over the weekend, the Store will also feature the “Big Joke” bundle. Laugh all you want over Baker’s “Clown” skin, but just know that the two Weapon Blueprints included here mean serious business.

The rarer of the two is the “Fool Proof” Legendary Marksman Rifle. With its attachment combo offering an increased fire rate and incredibly quick reload speeds among other benefits, you can’t go wrong with building a loadout around this reliable three-round burst weapon.
As for the other weapon blueprint, “The Punchline” Epic Shotgun is a four-attachment secondary that you may have seen around Warzone in Supply Caches.

Stay tuned next week for the Anime Assassin bundle, which will bring two Legendary Weapon Blueprints with some serious anime flair to the Store.

In case you missed it, Warzone received a patch update alongside Black Ops Cold War last Thursday addressing weapon balancing, bugs, and other issues. Check out the full notes here.

Are you ready to get off the bunny slopes? Because Ski Town’s trails are finally open for shredding as part of the Winter War Season.

Get ready to hop on a rocket-powered skateboard as you pull off sick 360 ° and 720 ° grabs while cruising down the new trails. It’s a fast way to get from the top of the hill, which has plenty of loot, to the bottom where the rest of Isolated’s action is happening, and you can get there by taking the new cable car up the main slope.

In celebration of trails opening up for the first time, Call of Duty: Mobile is starting its Snow Day Event. This Battle Royale-focused event has you completing tasks such as playing matches, landing at Ski Town, or travelling on your snowboard. Pick and choose the challenges you want to complete to unlock exclusive rewards around the Snowblind theme, including the Rare RPD – Snowblind blueprint and a Rare Wingsuit.

Check Out Studio Blogs and Social Media for More Information

For additional intel on Black Ops Cold War, including official patch notes when they are released, consult Treyarch’s Game Intel blogs and their Twitter account.

Updates for Warzone can also be found on Treyarch’s Game Intel Blogs, as well as Raven Software’s official Twitter account.