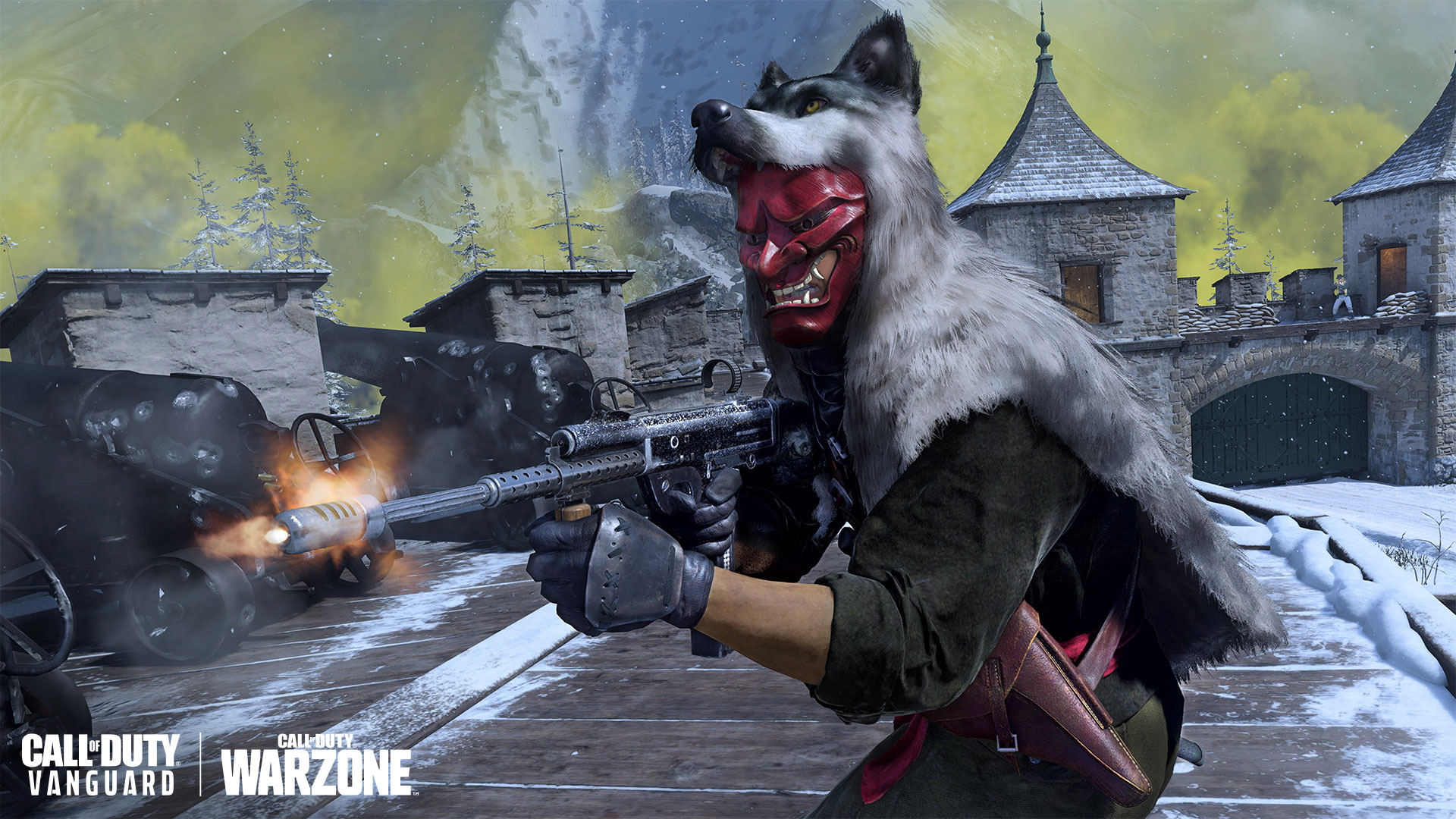 Lock and reload with this week’s update to Season Two of Warzone™ and Vanguard. Scout and conquer Rebirth Island Reinforced, prepare for a new mission across the Alps, and look for a new weapon and additional Bundles in the Store.

For regular updates about the Playlist and other Scheduled Events, check out the dedicated Warzone Trello Board.

Here’s a complete list of Weapon Trade Station opportunities and their respective rewards:

As always we will continue to monitor and listen to feedback, as well as communicate any experiments that we plan to carry out during the in-season to further refine Battle Royale.

The previously empty Shore has now become Dock. With an anchored cargo ship now present, climb aboard via the extended concrete helipad and discover the loot inside.

The Prison Yard has been partially reinforced and the construction materials can be used as cover or as platforms for jumping onto the guard wall walkways. The repainted water tower with Persus’s flags looms in the distance.

A second cargo ship has arrived at the Nova 6 Factory. Explore the ship for items and Supply Boxes but avoid falling into the water – it could be dangerous!

For a list of known #Warzone issues, please check out our dedicated Trello Board.

The Vargo 52 (BOCW) is a powerful new addition to the AR category and was outperforming where we wanted it to be. We expect that the weapon will still excel within its damage range and will be keeping a close eye on it for the future.

The Volkssturmgewehr (VG) tended to drift to the right while firing, which could distract or obstruct sight when it mattered most. This change mutes that Weapon movement considerably.

ADS Interrupt Time is the point in the Aim Down Sight animation where it can be interrupted by other actions. This change will make its Handling feel lighter and more responsive.

Vanguard Marksman Rifles were behind when looking at velocity. These adjustments are intended to make them far more reliable at their optimal ranges.

This change is significant as Melee Weapons deal 135 damage, which if left unchanged, would consistently require 3 hits to kill with the increase to base health.

On paper, the Sten (VG) has an incredibly compelling stat-line. In reality, it suffered far too much from its limited magazine capacities–which prevented it from piercing the upper echelon of Submachine Guns. A moderate mag size increase will make the Sten (VG) a more competitive option for those who prefer highly-mobile playstyles.

Hollow Point has been heavily leaned on by Submachine Guns and with good reason. Its previous damage range penalty would rarely affect the most common engagement distances. This adjustment to the ammunition results in a powerful tool, you’ll just have to get a little closer.

Our ongoing goal with ammunition is to provide options and move away from a singular choice that’s “good for any occasion”.

The Gorenko 40 Round Mags was simply providing far too much value and was overdue for an adjustment. This still leaves the Welgun in a very strong position despite the change to this particular Magazine.

The .30 round mags incorrectly went live with both an increase in damage globally and a decrease in locational damage for the head, neck, and upper torso. Only the decrease is intentional and as such, this update removes the flat 10% damage increase provided by the mag.

The power of this attachment primarily comes from the increased fire rate it provides the already lightning-fast Armaguerra. We’ll be monitoring its performance along with all other smaller magazines due to the change to core health and will make further adjustments as necessary.

The Season Two update will have a download size of approximately 9.0 GB for those who own the free-to-play console version of Warzone and are currently on the latest updates.

Note: PC users will also need 17.4 GB of additional space on their hard drive for the patch copying process; this is only temporary space that is reclaimed upon completion of the patch installation and is not an additional download.

Remember, the Vanguard download is not necessary if you are only playing Warzone, and vice versa.

Furthermore, for a smaller overall file size, Players can choose to uninstall/remove other data packs if they are no longer needed.