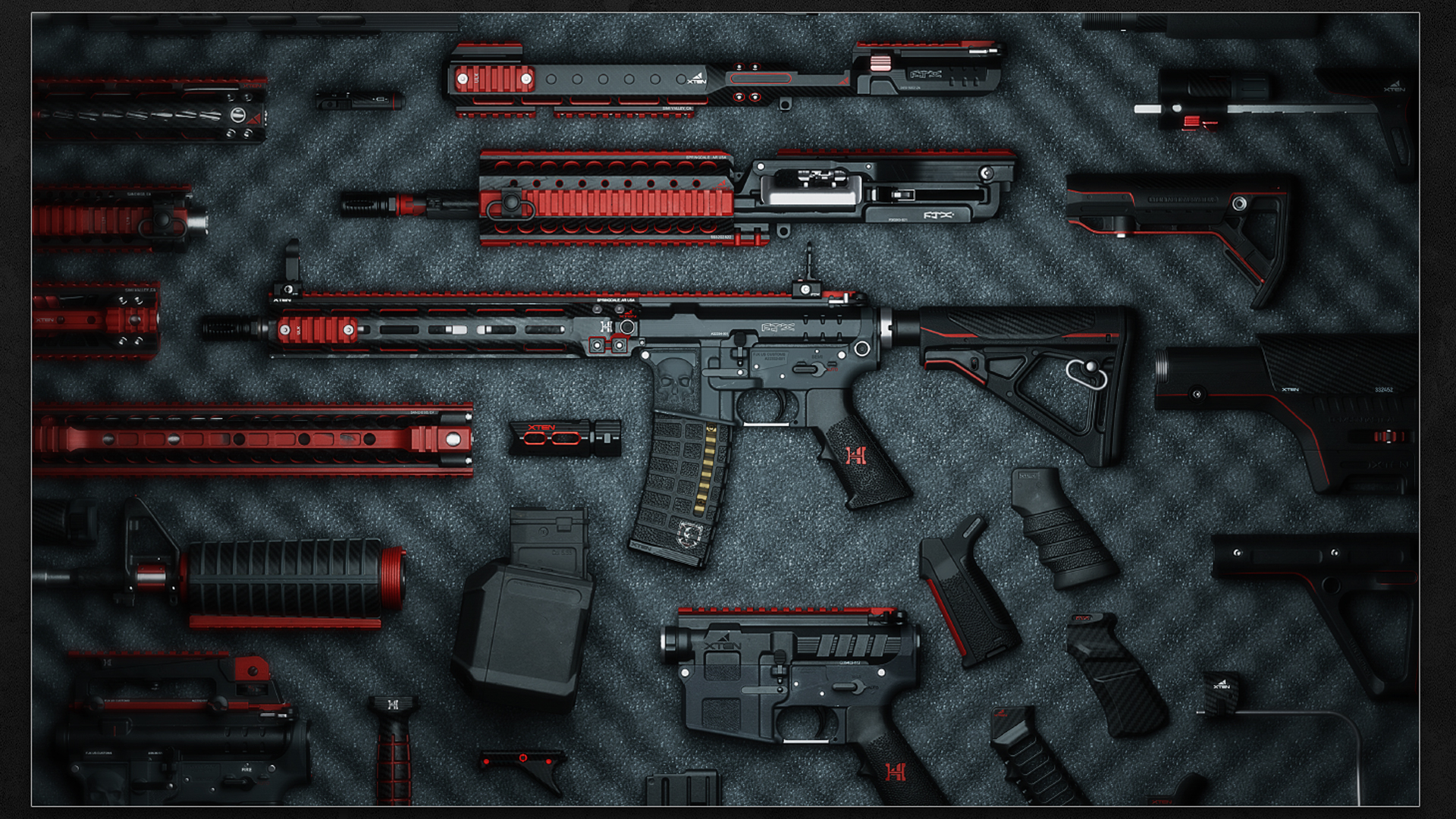 Prepare to create an extension of your personal playstyle like never before with a revamped Gunsmith. Using the FJX Cinder Weapon Vault, available with the Vault Edition of MWII, we take a first look at the next iteration of this loadout-building tool.

The most powerful weapon is team, but it doesn’t hurt to have the right tools for the job.

The Vault Edition also comes with a first-ever loadout item ready for a rebuilt and revamped Gunsmith:

A Weapon Vault is the ultimate Weapon Blueprint: a variant of a weapon that keeps its cosmetic properties on all attachments native to its base platform.

And you can customize the FJX Cinder variant in Modern Warfare II… through a rebuilt Gunsmith.

Created by Infinity Ward, the new Gunsmith revamps this vital Loadout creation tool from Modern Warfare (2019) for a more customizable way to build a weapon.

Based in part on learnings from the community, along with Infinity Ward’s commitment to making a broader and more explorative weapon builder, this Gunsmith’s initial features can be defined by the following bullet points:

Tempus Armament’s M4, the first unlocked Weapons Platform in Modern Warfare II, shown within the in-game Gunsmith. All Tempus Armament attachments are shared between every weapon Receiver in its Platform: the M4, M16, 556 Icarus, FTAC Recon, and FSS Hurricane

For this pre-Beta breakdown, let’s focus on Weapons Platforms.

Unlike previous years where every weapon is a separate family, Weapons Platforms streamlines progression and create attachment pools for easier swaps between playstyles via the Gunsmith. Although some Weapons Platforms still contain one weapon – the RPG-7 and Lockwood MK2 “cowboy rifle,” for example – other, more modern Platforms can have three, four, or even five different weapons.

In Modern Warfare II, Operators will receive every base Weapons Platform from each manufacturer on their Military Rank (Rank 1 to 55) progression journey. The first weapon unlocked on a Weapons Platform will be known by its Receiver, the core of a weapon that determines its primary use and strengths.

For example: the above M4, the first unlocked Weapons Platform, is from Tempus Armaments and is classified as an Assault Rifle.

After selecting a Primary or Secondary Weapon and heading to the Gunsmith, you will see the “Receiver” attachment in addition to slots for Muzzles, Barrels, Magazines, and other parts you’re already familiar with.

Here’s how to swap Receivers in the Gunsmith, using the M4 and M16 as an example. Note how all attachments are retained despite this weapon switching to a completely new one.

Just like in previous games, levelling up a weapon unlocks attachments. In Modern Warfare II, these unlocks include Receivers.

Changing a weapon’s Receiver completely alters what the weapon is; it’s considered a “new” weapon when building a Loadout, but it still lives within the same Weapons Platform.

In the case of Tempus Armaments’ M4 Weapons Platform, there are four Receivers in addition to the base M4: the M16, the 556 Icarus LMG, the FTac Racon Battle Rifle, and FSS Hurricane SMG.

Each new Receiver can be seen in its designated Weapon Categories in the Loadout Screen. However, while editing any weapon that is part of a larger Weapons Platform, you can simply swap Receivers in the Gunsmith.

Tempus Armament’s M4 Weapons Platform Progression map. By leveling up each Platform across each of its Receivers, you will unlock attachments that can be used across all weapons within the Platform, as well as attachments across ALL Platforms.

In levelling up a Weapons Platforms, you unlock two types of attachments:

The first is for the specific Weapons Platform – Receivers, Barrels, Stocks, Rear Grips, and Magazines. These are sharable within the Platform across all Receivers.

The second are attachments that can be used across ALL weapons that are able to equip them. These are Optics, Ammunition, Underbarrels and Foregrips, and Muzzles. This lets allows you to collect an arsenal of attachments that only need to be unlocked once.

For example, let’s punch into the M4’s Progression track: at Weapon Level 1 and 2, you unlock the SZ Reflex Optic and the Echoline GS-X Suppressor Muzzle attachment.

Once these are unlocked, these attachments can be used across ANY weapon in the game.

Weapon Levels 3 and 4, meanwhile, contain attachment unlocks that are specific to this Weapons Platform: the 11.5” T-H4 Barrel and the 45-Round Mag. These Platform-specific attachments can be used across all weapons in the M4/Tempus Armaments Weapon Platform.

There is no need to re-unlock these kind of attachments for each individual Weapon in the Platform, but different Weapons Platforms have their own Barrels and Magazines to unlock.

The FJX Cinder Weapon Vault, shown with different Receivers and attachments. Owning the Weapon Vault means having every attachment from an equivalent Weapons Platform ready to use and with the same sleek design.

This new Weapons Platform system shows the resourcefulness of Weapon Vaults, such as the FJX Cinder.

Think of the Weapon Vault as the Ultimate Weapon Blueprint: First of its kind and highly classified, the Weapon Vault instantly unlocks dozens of platform-native attachments from an alternate manufacturer.

A Weapon Vault allows for immediate customization with a collection of Receivers, Barrels, Stocks, Rear Grips, and Magazines. Other attachments – Optics, Ammunition, Underbarrels and Foregrips, and Muzzles – can be outfitted to the FJX Cinder once they unlocked normally.

All Weapon Vault attachments are hand-crafted to with a specific cosmetic appearance in mind; Weapon Vaults are designed for those who care about appearance just as much as effectiveness, especially for a specific Weapons Platform.

In the case of the FJX Cinder Weapon Vault, consider it an aftermarket, bespoke, or rival version of our example Weapons Platform.

Its nearly the exact same Platform right down to camouflage unlocks, but with every attachment ready for immediate use with a red-and-black graphical design maintained no matter the configuration.

The FJX Cinder is a strong introduction to the new Gunsmith you’ll definitely want to experience when Vault Edition pre-order owners play the Beta on PlayStation 4 and PlayStation 5 starting on September 16, as well as when Modern Warfare II launches on October 28.

Remember to pre-order the Vault Edition of Call of Duty: Modern Warfare II to get your hands on the FJX Cinder during the Open Beta and on day one.

What’s Next for Intel – Guides Return with the MWII Beta

Weapon Platforms and the new Gunsmith are just two of the dozens of new features in Modern Warfare II – and you will be well-prepared to explore them thanks to an unprecedented amount of official intel at your disposal:

We are excited to announce free and Official Guides for Modern Warfare II, covering the game in its entirety.

A prologue to this guide will be released on the same day as Call of Duty: Next, and will cover everything you need to know about the Modern Warfare II Beta.

For example: there’s a dedicated chapter on the Weapons menu that expands on the above Gunsmith information and details the entire process of building a Multiplayer Loadout, including tactics for Equipment, Perks, Field Upgrades, and Meta-minded examples to try out.

All of this lives alongside a full breakdown of every Killstreak and Vehicle (including Customization) in the game within that Weapons menu… Which is just one aspect of this new and improved Official Guides for the next generation for Call of Duty.

Be sure to check all official social channels to see when the Guide Hub page will be available on the Call of Duty website, and as always: