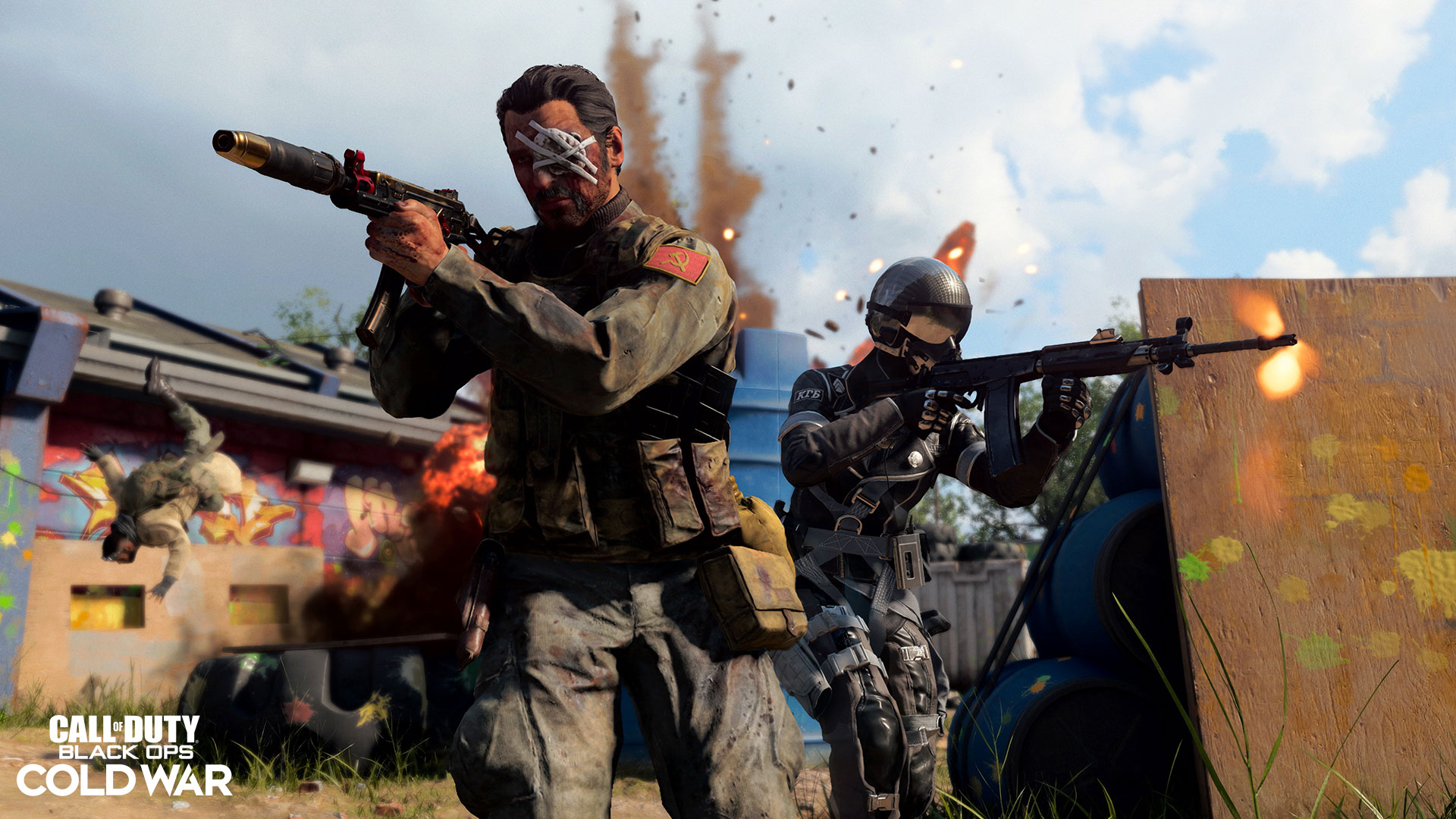 Quick and dirty, the OTs 9 boasts high power in a small package. Read on for tips to help you complete its in-game unlock challenge, plus a look at the Inside Job Store Bundle.

Let’s start with the OTs 9. Unlock this blazing fast SMG for use in Black Ops Cold War Multiplayer and Zombies, and in Warzone™, by completing its in-game challenge or by purchasing the Inside Job Store Bundle.

Here’s what you need to know:

Unlocking the OTs 9 — Tips and a Bundle

A firecracker of an SMG, the OTs 9 boasts impressive stopping power with a phenomenal rate of fire, hindered only by its low-capacity magazine. Unlock the base version of the OTs 9 by completing the unlock challenge in either Multiplayer or Zombies.

In Zombies, prepare to face the Tempest:

Using SMGs, kill 100 Tempests within 2 seconds of them reappearing after teleporting.

Lock and load, Operators. Here are five tips to help you on your way:

1. Multiplayer Loadout Suggestion. The Multiplayer unlock challenge requires some forethought in your attacks, as you must first deploy your Tactical Equipment and then eliminate the target. This loadout will ensure the job gets done:

Blind and eliminate, that’s your objective. Using this loadout, it shouldn’t take long to get the job done. For your SMG, we recommend the “Last Words” SMG Weapon Blueprint, featuring Fast Mag for quick reloads and the 14.9” Ranger for a major boost to bullet velocity. Add the Steady Aim Laser and you’re good to go.

With the Danger Close Wildcard, you’ll start each life with maximum ammo and double the Equipment. For the challenge, we’ve picked the Flashbang Tactical Grenade, a great lead-in when breaching enemy objectives.

Take Tactical Mask for those inevitable times when your Flashbang detonates too close by and to reduce the harmful effects of enemy-thrown Tactical Equipment. Quartermaster restocks your grenades over time, so let the Flashbangs fly. Using Gung-Ho, you can toss them mid-sprint while rushing the objective.

To maintain maximum mobility, use hip-fire to take down blinded targets. And when the skies get crowded with aerial threats, clear them with your SAM Turret so you can stay focused on the objective at hand.

2. Stick to Respawn Modes. The more chances to complete your objective, the better. Respawn modes keep the action flowing, giving you multiple opportunities to land the three kills needed per match. Consider Hardpoint in particular, and use the loadout above to blind and eliminate enemy defenders guarding the hill.

3. Zero In. It can be tempting to wildly spray bullets in a room full of enemies, but you risk damaging everyone and eliminating no one. When encountering groups, take out the blinded targets one by one. Even if you don’t finish them all off, you’ll be closer to completing the unlock challenge for that match.

4. Zombies Loadout Suggestion. In Zombies, you’ll be facing the electric Tempest found within Outbreak. You need to eliminate 100 within two seconds of them reappearing after teleporting. Here’s what we recommend:

Boasting the massive Spetsnaz 85 Round magazine, the “Serpent Idol” SMG Blueprint is perfect for inflicting heavy close-range damage over a sustained period of time. When a Tempest first appears, start damaging it until it teleports, and then unload straight into its chest — the Tempest’s critical weak point. If there are several enemies around, use Aether Shroud so you can attack without interruption.

5. Rot Their Brain. Tempests are weak to the Brain Rot Ammo Mod, so visit a Pack-a-Punch machine and add it to your weapon. As long as you don’t have Tier IV yet, which risks turning the Tempest to your side before you can kill them, the extra damage will help you make quick work of them. If you’re at Tier IV, equip another Ammo Mod or save your Essence for the main Pack-a-Punch upgrade.

Unlock the OTs 9 in the Store

Can’t wait to jump into the fight with the OTs 9? Stock your arsenal with a Blueprint version before completing the in-game challenge with the Legendary “Undercover Agent” Weapon Blueprint.

Featured in the Season Four Reloaded Inside Job Store Bundle, the “Undercover Agent” Weapon Blueprint is built for the battle connoisseur, both deadly and dripping with style. The Bundle also includes the “Hook & Sinker” Finishing Move, the “Spy Pack” Weapon Charm, the “Working Party” Emblem, and the “Stallion” Sticker.

Pick up the Inside Job Bundle today to get your hands on the latest SMG before completing its challenge. Keep in mind that the “Undercover Agent” Weapon Blueprint won’t unlock the base version of the weapon. For that, you’ve got to complete the challenge.